In Retiring, Winston Looks Forward to His Busy, Bright Future 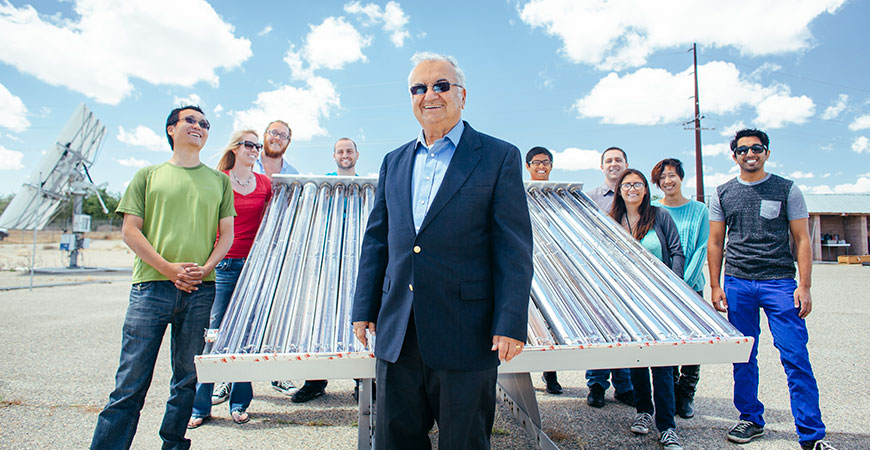 Professor Roland Winston and some of his student researchers and their solar collector.

Distinguished Professor Roland Winston was among the first eight faculty members at UC Merced in 2003, two years before the campus opened. When he retires July 1, at age 86, he will be the first of those eight to leave — but his work on solar energy applications will continue.

It's not hyperbolic to say Winston is a really big deal in the worlds of physics and solar energy.

More than 50 years ago, as a junior faculty member in the University of Chicago Physics Department, he published a paper introducing a new field he called nonimaging optics. In it, he described a highly efficient device that collects and concentrates light and introduced nonimaging light collectors that by their design maximize the amount of light that can be focused from large areas into smaller photodetectors or photomultipliers.

All solar-concentrating research that has followed has been based on that paper. International experts are still highlighting the importance of Winston’s breakthrough. Professor Aldo Steinfeld of ETH Zurich university was asked by his campus’s president to present an example of basic research that led to a highly practical application comparable to Albert Einstein’s photoelectric effect that led to the development of photovoltaics, he cited Winston’s work.

“Roland literally and figuratively brought star power to UC Merced,” fellow founding Professor Christopher Viney said. “His accomplishments in the efficient harnessing of solar radiation as an energy source, his reputation in high-energy physics and nonimaging optics, and his successful career in research, administration and teaching at the University of Chicago prior to coming to Merced all contributed to an aura of someone whose opinion ought to be taken seriously.”

Winston was born in 1936 in Moscow, the son of an American engineer who was helping the Russians design towns and build an industrial base. The family had to evacuate Russia in 1942, during World War II, as the German military got within artillery range.

“A whole string of lucky things happened,” Winston said. “That was the point at which the war tipped from the Germans to the Allies, and just as the battle of Stalingrad was winding down my mom and I got permission to go to the United States. It was good timing because there were long-distance bombers available for transportation, so we were flown to Basra, Iraq.” A supply ship took them to New York City, via India, Australia and Panama.

He attended the Bronx High School of Science and earned early entrance to Shimer College in Chicago before transferring to the University of Chicago where he earned a bachelor’s degree, a master’s degree and a Ph.D.

After a short stint as an assistant professor at the University of Pennsylvania, Winston returned to the University of Chicago and worked his way up to being chair of the Department of Physics. He conducted research at CERN (European Organization for Nuclear Research) in Geneva and at Argonne National Lab and the Enrico Fermi Institute, both in the Chicago area.

“It was an amazing faculty and a wonderful experience,” he said of the university where he studied and worked from 1952 until 2003.

A NEW KIND OF SCIENCE

Winston’s research interests include high-energy and particle physics, astrophysics, optical design techniques, photovoltaic power systems and the discipline he helped invent, nonimaging optics, a field concerned with the optimal transfer of light radiation between a source and a target. 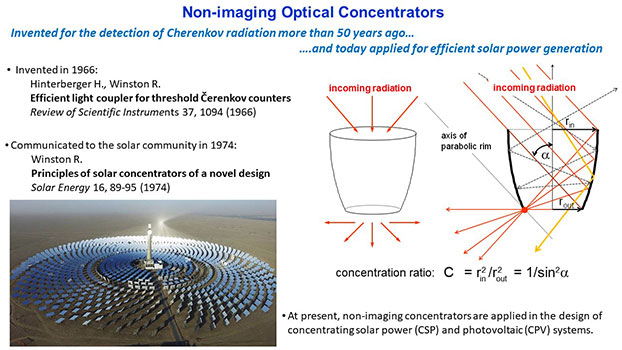 Nonimaging solar collectors — once thought to be impossible — don't need to track the sun and can even function well under cloudy or hazy skies. They have revolutionized solar energy use because they provide the widest possible acceptance angles and are the most appropriate for use in solar concentration. They offer higher solar concentrations in smaller cells and generate higher temperatures with less thermal loss. They improve the reliability and efficiency of the solar cells in concentrated photovoltaics and improve heat transfer in concentrated solar thermal.

“Most scientists are grateful to generate worthy incremental progress in their fields. Only a select few succeed in inventing and advancing a fundamentally new scientific discipline, and Roland Winston is among them,” former colleague Professor Jeffrey Gordon said in celebrating the golden anniversary of Winston’s initial invention.

In the early 1970s, he invented the compound parabolic solar concentrator (CPC), and Winston Cones, the individual parabolic elements that make up a CPC.

A Winston Cone is a non-imaging collector that concentrates light, maximizing incoming rays by allowing them to make multiple reflections before reaching the exit aperture.

His inventions have been recognized with a slew of awards and honors. He is a former Guggenheim Fellow, won the Joseph Fraunhofer Award for “significant accomplishments in optical engineering” from the Optical Society of America and was elected as a U.S. delegate to the International Solar Energy Society in 1991. He has authored more than 200 publications and co-authored three books.

In 1988, using a new mirror-based technique, Winston and his team set a record for concentration of solar energy, concentrating sunlight to more than 60,000 times its normal intensity.

A research team at Sudbury Neutrino Observatory in Ontario, Canada, shared the Nobel Prize in Physics in 2015 for an experiment that uses 10,000 Winston Cones and team members thanked him in their acceptance speeches.

A NEW UNIVERSITY, A NEW HOME

The earliest leaders at UC Merced recruited some of the brightest stars of their disciplines to lay the foundations of the academic and research endeavors.

“Roland was the most distinguished of all the initial faculty that joined the campus in its earliest days, bringing an air of academic legitimacy to the fledgling UC campus,” said former Vice Chancellor for Research Professor Sam Traina. “Roland’s research in solar energy positioned the campus to be a world leader in the creation of environmentally sustainable infrastructure, imbedding this focus into the campus’s DNA. This emphasis has now spread to many areas of the university. He has had an enormous impact on UC Merced.” 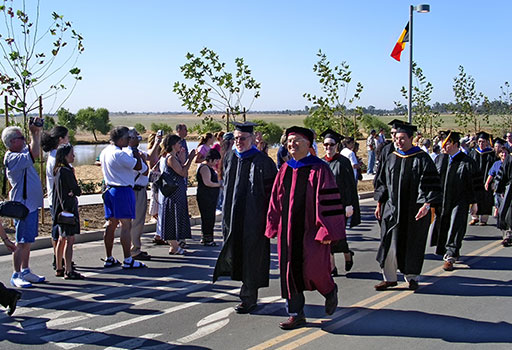 Winston said he was drawn to UC Merced by the opportunity to work with the founding faculty, and like all of the campus’s founders, he played many roles including serving on committees and chairing the faculty Senate at one point. He and his colleagues helped the deans plan academic programs and recruit the next complements of faculty, emphasizing the creation of interdisciplinary research teams.

At the time, he said his goal was to help establish an “absolutely world-class academic program” in renewable energy.

One of his proudest accomplishments, he said, was helping recruit “superb, world-class solar scientist Sarah Kurtz,” who worked at the National Renewable Energy Laboratory for many years. She researches energy storage and evaluates systems to improve efficiency and feasibility.

Winston has been affiliated with both the schools of Natural Sciences and Engineering, and launched the California Advanced Solar Technologies Institute, or UC Solar, a nine-campus collaborative that twice received the highly competitive UC Multicampus Research Programs and Initiatives awards from the Office of the President.

“Roland was often the last person to speak in a discussion, but his few words would capture the essence of what mattered and what should be done. He never let gravitas stand in the way of action. He threw his mental and physical energy into the myriad details of building this institution, even before a recognizable campus existed,” Viney said. “Whether it was the founding of solar energy research at UC Merced, or planning innovative curriculum for science and engineering, or developing outreach activities, or taking a lead in promoting shared governance, or simply participating in ceremonial occasions, he was broadly engaged in all aspects of the emerging soul of UC Merced.”

Nonimaging optics formed the basis of the solar concentration research in the UC Solar lab. Projects developed there include non-tracking, low-cost solar thermal collectors that achieve temperatures in excess of 200 degrees Celsius; tracking hybrid systems that achieve both high electrical output and enhanced thermal performance; heating, cooling and desalinization inventions; and even a solar-powered drum dryer that reduces food-production waste to a fine, lightweight powder.

Many students have passed through the UC Solar lab. Some, however, remained and were hired as postdocs and lab managers. Now that UC Solar’s UC funding has run out, some of those alumni form the core team at Merced-based Winston Cone Optics, founded in 2012.

For example, Vice President of Business Development Lun Jiang studied environmental systems as a graduate student at UC Merced. He was a research scientist at UC Solar and holds two patents for solar thermal technology. He has worked with Winston for nine years and is now an expert on the External Compound Parabolic Concentrator (XCPC), a device being used in applications from heating and cooling to water desalination and energy generation.

Chief Technology Officer Bennett Widyolar studied environmental engineering, mechanical engineering and environmental systems as an undergraduate and graduate student at UC Merced. He has also been with Winston for nine years and was entrusted with installing XCPC demonstration arrays in such places as Ulaanbaatar, Mongolia’s capital. Research and development Engineer Yogesh Bhusal completed his master’s and Ph.D. degrees in mechanical engineering under Winston.

UC Solar and Winston Cone Optics are so entwined that the company hired former executive assistant Robyn Lukens to be chief financial officer, and recently added alumna Jordyn Brinkley to the staff, too.

Many of UC Solar’s projects have been integrated into Winston Cone Optics as well.

“We've got a grant right now from the California Energy Commission to build the next generation of our traditional XCPC,” Widyolar said. “We patented it through the UC and we're licensing it… We're trying to reduce costs and make it simple to pack and ship. It's going great. We're working with Sarah Kurtz and her grad students and they're testing our early prototypes.

“The whole thing is going to culminate on a 500-square-meter setup on an industrial food processing plant in California. That's going to be our big step into the commercial space. We’re finally getting out of the lab.”

A couple of other projects happening now:

Winston said that although he will be retired from the university, his company will continue to work with researchers on campus.

Expecting him to slow down is futile. Up until the pandemic, he was still traveling internationally to speak at conferences and work on projects.

Although he lost his wife, Pat, of more than 60 years, he has two sons and two grandchildren to spend time with. He also has a second home in Wisconsin, which he visits in the summers.

But to finally take it easy and relax by the lake?

“That's just for vacations,” he said with a smile.