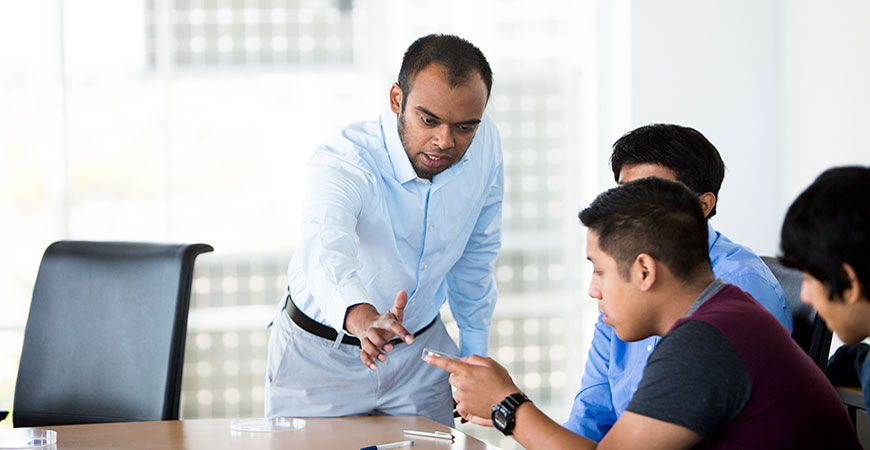 Professor Subramaniam is excited about the opportunity to attract students to the STEM fields.

Professor Anand Bala Subramaniam with the School of Engineering has been named UC Merced’s 23rd CAREER award recipient, and the first in the Department of Bioengineering .

This is Subramaniam’s third grant as principal investigator from the National Science Foundation. He is also a founding co-investigator of the NASA-funded Merced Nanomaterials Center in Energy and Sensing (MACES), and recently earned the UC Merced Academic Senate’s Distinguished Early Career Research award.

CAREER awards are among the National Science Foundation’s most prestigious grant awards, given through the NSF Faculty Early Career Development Program. Early-career faculty members are selected on the strength of their research, because they demonstrate innovative approaches to teaching and are leading advances in the missions of their fields or organizations.

Subramaniam, who joined the campus in 2014, heads an experimental lab that develops novel biomaterials for use in bottom-up synthetic biology and in drug delivery.

“Professor Subramaniam is a very talented scientist. The CAREER awards are very competitive,” said Professor Ariel Escobar , department chair. “We are very happy he made the decision to join our department, and proud of him for earning this honor.”

The CAREER award provides $500,343 over five years for Subramaniam to probe how cell-like synthetic vesicles assemble spontaneously from lipid molecules.

Scientists have been able to make synthetic vesicles since the 1960s, but much remains unknown about what controls critical properties such as their size and numbers.

“This award will allow us to use cutting-edge techniques to probe quantitatively the physical mechanisms of vesicle assembly,” Subramaniam said. “Knowing how to control their size, maximize their numbers, and how to controllably load them with molecules is key for using them in applications.”

Subramaniam’s lab uses synthetic vesicles to study processes that occur in cells in a simplified non-living environment. The goal, eventually, is to engineer semi-synthetic cells that repeat the complex processes found in living biological cells. That will help bioengineers perform useful functions such as precisely delivering medications in the body.

“I fell in love with scientific research when I began doing hands-on experiments in high school,” Subramaniam said. “I hope that being exposed to the scientific method of experimentation and hypothesis testing at an early age will attract younger students to study science, technology, engineering and math.

“It is truly an honor to receive this support and recognition from the NSF. I am grateful for the continued support and encouragement of the Bioengineering department and of the campus.”