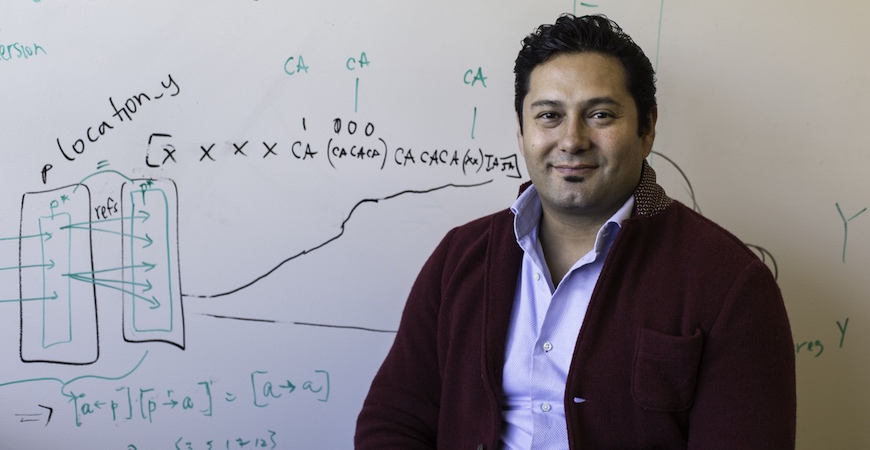 A group of interdisciplinary scientists have put the practice of science itself under a microscope to begin quantifying the fundamental drivers of scientific discovery and to help develop tools and policies aimed at improving the scientific endeavor.

An article co-written by 14 researchers from various universities including UC Merced, lays out a framework that could pave the way to improving the current researcher-evaluation system. Many people say the current system stifles younger researchers, especially those working at the intersections of disciplines.

The article, published online today in the prestigious journal Science, also advocates for stronger incentives to encourage curiosity and creativity-driven risk-taking.
The researchers hope to spur conversations and new policies that enhance career paths for scientists, lead to improved performance-evaluation processes, help identify new and exciting areas along the scientific frontier and compel new and better ways of funding science.

The Science of Science, or SciSci, as the researchers call it, uses large-scale data to measure the co-evolution of researchers, ideas, institutions, funding and publications — a large network of networks.
The researchers used different links in the larger network, including article-to-article citations, which are a common measure of scientific papers’ influence.

“Citations are a form of career currency,” said UC Merced Professor Alexander Petersen, a researcher in the management of complex systems department within the School of Engineering and a co-author of the article. “As scientific evaluation becomes metric-driven, assessment of career progress is increasingly impacted by how often we are cited by other researchers. It’s not a perfect system, but it’s objective and it can weigh heavily on the trajectory of our careers.”

"As my colleagues have shown, it’s possible there could be a more effective and more efficient way to distribute public funding for research."

Because science builds on other scientific work, each new research paper published must cite previously published work and its authors. As a result, researchers become linked via collaboration and in the way they cite each other.

The need for recognition and citations for career advancement has exacerbated a “publish or perish” mentality among researchers, Petersen said. Every researcher would like to be published in the most noteworthy journals, but there is stiff competition to do so. “Mega-journals” — a new online-only rapid-publishing model geared around charging researchers to publish their articles — can publish upwards of 400 articles per week, but authors must pay to be included. That forces researchers to strategize: To pay or not to pay.

The SciSci authors say the increasingly quantitative evaluation system, which heavily relies on the citation-count system, spawned a “rich-get-richer” dynamic in which the most-cited, senior-level, rock-star researchers who already have big grants get more big grants, while junior faculty, especially those who don’t fit traditional science disciplines — such as those who work at the emerging intersection of economics and neuroscience — are less able to support their work.

This is an issue federal granting agencies struggle with as they develop policies to help early-career and interdisciplinary researchers compete for much-needed but limited funding.
“There is a lot of work that goes into trying to get a grant, but a lot of what’s being funded isn’t research that has ground-breaking potential, because the researchers simply aren’t willing to take the risk to submit risky proposals,” Petersen said. “As my colleagues have shown, it’s possible there could be a more effective and more efficient way to distribute public funding for research.”
Even though interdisciplinary research often leads to novel ideas with high impact, evidence from grant applications shows that expert evaluators typically give lower scores to novel or interdisciplinary research proposals, the paper says.

The authors advocate improving the evaluation system to make it more supportive of interdisciplinary collaborations.

How can individual researchers leverage the SciSci findings? Petersen said he discovered something that surprised him through his contributions to SciSci: Scientific “life partners” are rather common and can explain a great deal of scientific success.

What’s behind two individuals who are highly capable on their own coming together to create an explosion of innovation could be a future SciSci topic for study. Scientific partners share the risks, Petersen said, but they also share the rewards.

“There are a large number of scientists who find partners and stick with them over their lifetimes,” he said. “About 1 in 6 of the super-star scientists I looked at shared more than half their publications with their strongest partners. I call those partnerships ‘super-ties.’ And when I analyzed their individual careers – comparing those publications with super-ties to those without – the publications with super-ties have significantly higher citation impact. It’s not just a matter of skill complementarity, but also a matter of mutual trust, conviction, commitment — and fun.”