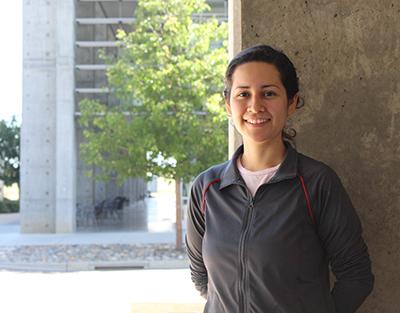 A doctoral degree is the culmination of years of study and hard work — a mark of determination, willpower and excellence in research and scholarship.

For Quantitative and Systems Biology graduate student Yuriana Aguilar and the growing population of undocumented students like her, it is also a beacon of change and promise.

Aguilar, who first enrolled as an undergraduate at UC Merced in 2007, will make history during Sunday’s commencement ceremony when she becomes the campus’s first undocumented Ph.D. recipient.

“Yuriana is an exemplary scholar whose promise has been realized during her time at UC Merced,” Vice Provost and Graduate Dean Marjorie Zatz said. “As the recipient of the first doctoral degree awarded to an undocumented student at UC Merced, she paves the way for a new generation of researchers and educators who need only access in order to make a lasting, positive change in the Valley and beyond.”

While at UC Merced, Aguilar has lived through some major changes to policy and institutional culture regarding her undocumented status.

“When I started out, it was tough,” Aguilar said. “I could see people trying to help, but their hands were tied because they had to abide by certain policies. Now, things are slowly getting better.”

The growing number of undocumented students at UC Merced led to the creation of the Services for Undocumented Students and Special Populations office in Fall 2014. The office’s mission is to empower undocumented students to achieve their academic and personal pursuits. On a day-to-day basis, that means providing counseling and information about academics, financial aid and legal issues, and serving as a referral network for other student issues that arise.

Alejandro Degadillo, who oversees the Undocumented Student office, said state and federal legislation over the past 15 years — along with institutional support, such as UC President Janet Napolitano’s announcement today of increased funding for undocumented student aid and services — has dramatically improved access to higher education.

“Things have gotten significantly better for undocumented students, particularly in California,” he said.

Research That Could Save Lives

For Aguilar, such legislation and campus support have been the means by which she has created a better life for herself and her family — and prepared herself to give back to her community and to make a difference in the world through her research.

A Fletcher Jones fellow, Rose R. Ruiz scholar and Miguel Velez scholar, Aguilar works with Professor Ariel Escobar on research looking at sudden cardiac death — a condition in which the electrical system in the heart malfunctions. Sudden cardiac death is the leading cause of natural deaths in the United States.

Specifically, Aguilar is studying T-wave alternans (TWAs), which are predictors for sudden cardiac death. TWAs tell researchers everything that’s happening in the heart.

The problem with TWAs as predictors is they only begin when symptoms occur. That means that doctors don’t know that a patient is at risk for sudden cardiac death until they are in the midst of a cardiac attack, and likely have less than an hour to live.

The Escobar lab has developed a new technique to learn more about the way the heart and TWAs function. Aguilar loads an actual beating heart with a sensitive dye that measures cardiac properties. This makes it possible to look at what is happening on the cellular level in the heart, as well as the surface structure of the organ.

The goal of Aguilar’s research is to better understand the molecular mechanisms that generate TWAs — knowledge that could eventually help to predict the likelihood of sudden cardiac death much earlier and allow those at high risk to get treatment.

“Yuriana’s work is stunning, and it will have significant impact on our knowledge of the workings of the heart at the cellular level,” School of Natural Sciences Dean Juan Meza said. “The potential benefit of her research to cardiac care is enormous.”

After receiving her Ph.D., Aguilar would like to stay in the Central Valley. Ideally, she’d love to see the Valley get its own state-of-the-art research hospital — and not simply because she’d love to work and teach in such a facility.

“Even though I was not born in the United States, the Central Valley is my home,” Aguilar said. “I love it here, and I want the best for this community.”