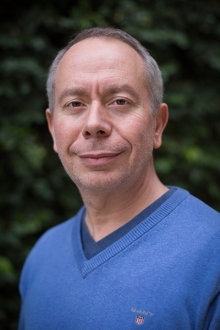 Imagine trying to reverse engineer a car when all you have is a finished product or a box full of parts — no instructions.

That’s what scientists have been trying to do with proteins, the mysterious and powerful molecules in every living organism that are responsible for thousands of tasks every day, such as catalyzing metabolic reactions, responding to stimuli and transporting molecules from one location to another. The body uses proteins to build and repair tissues, make reactions happen, signal and control processes, and as hormones and antibodies.

“They are the little machines inside cells,” UC Merced bioengineering Professor Victor Muñozsaid. “They pretty much do everything.”

Thanks to Muñoz and his research colleagues, those instructions are becoming clearer because for the first time, researchers can watch the intricacies of the process by which proteins self-assemble into their functioning states.

In their new paper — “A Simple Two-State Protein Unfolds Mechanically via Multiple Heterogeneous Pathways at Single-Molecule Resolution,” published this week in Nature Communications — Muñoz and his colleagues detail how they are beginning to illuminate a mysterious natural process that, if controllable, could lead to breakthrough treatments for diseases, among many other applications.

Each protein is a unique string of amino acid chains encoded with DNA that dictates its mission. But each protein has to achieve its proper 3-D shape to fulfill its destiny.

Scientists don’t know how proteins fold, or why they sometimes misfold. Folding is hard to catch because it happens rarely and instantaneously.

“Waiting for proteins to fold is like watching soccer — nothing seems to happen for a long time, then, suddenly, you blink and miss the goal being scored,” Muñoz said. “We know that when a protein folds it must follow a complex series of steps, like assembling a car in a production line. The problem is that when the protein actually folds, all the steps happen almost at the same time, and their order changes every time.”

The new paper outlines Muñoz’s sophisticated biophysics experiments, including attaching protein molecules to a tiny cantilever, then pulling on the molecules using force-spectroscopy. A better, higher-resolution method allows the researchers to actually see the steps in the process.

Muñoz and his colleagues are also running parallel computer simulations to confirm and replicate the folding patterns, which is important because proteins can evolve stochastically — with a random probability distribution or pattern that may be analyzed statistically, but may not be predicted precisely.

“These combined methods are unique tools for dissecting the mechanical unfolding mechanisms of proteins,” the professor said. “If we could control the folding of proteins, we could do so many things better. We could treat diseases without harsh chemicals. We could engineer designer cells that kill cancer, for example.”

The protein work is related to one of three focus areas of UC Merced’s new CREST Center for Cellular and Biomolecular Machines, co-led by Muñoz. The center brings together more than a dozen faculty members from across campus, including bioengineering, physics, chemistry and chemical biology, materials science, and engineering.

Funded by a $5 million grant from the National Science Foundation’s Centers of Research Excellence in Science and Technology (CREST) program, the center includes researchers who are studying how biological matter like proteins or cells come together to perform specific tasks. The work could help scientists design and develop innovations ranging from designer cells and tissue to novel diagnostic and therapeutic devices.

It also dovetails with the work Muñoz is doing through the prestigious $1 million Keck Award he won earlier this year.

With that grant, Muñoz plans to design and engineer a new kind of protein he previously discovered, creating miniscule biosensors that can measure even slight changes inside cells and provide high-resolution, highly specific information in real time.