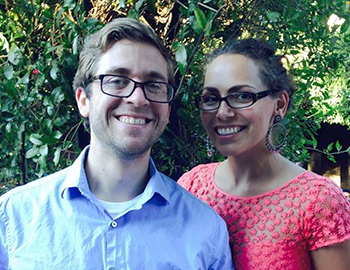 Erik Olstad started down the path to becoming a veterinarian by accident.

After high school, the now 32-year-old attended California State University, Fresno, to get a political science degree. But while snowboarding at China Peak, he took a serious spill on a landing and broke his back.

Unable to finish the school year — his recovery took more than three months — Olstad returned to his parents’ home in Merced to recuperate and found himself with a lot of time to think about his future plans. He decided to change his major to biochemistry, and in 2005 he started taking classes at the newly established UC Merced.

“During the healing process I was a little depressed,” Olstad said. “I decided I really wanted to do something I loved, so I jumped in with both feet.”

He said his education at UC Merced prepared him for the rigors of the UC Davis School of Veterinary Medicine, widely considered one of the best veterinary programs in the country. UC Merced’s close-knit, intimate feel had educational benefits as well, he said.

“The professors were excellent and the class sizes were laughably small,” Olstad said, adding that some of his classes in those early years at UC Merced had as few as eight students. “I was able to get direct access to my professors.”

Olstad proved to be a model student at UC Merced until he graduated in 2008, and was a teacher’s assistant in a few of his classes.

Like many former UC Merced students, Olstad said he was able to shape his own experience at the young university. Getting into UC Davis’ elite program was difficult, Olstad said, but he became the first UC Merced student to be accepted to and graduate from a veterinary program.

And in his own small way, he helped spread the word about the fledgling campus.

“I was the first from UC Merced to enter the program, and they were like, ‘Who is this guy?’” Olstad said with a laugh. “I had to really explain myself and my experience.”

The hard work paid off. He graduated from UC Davis in 2013, and during his time there, met his fiancée, Katie Barnes. The two spent the past three years in Michigan, but Olstad returned to Central California last year after getting hired at VCA Loomis Basin Veterinary Clinic in December. Barnes is finishing her residency at Michigan State University, and will return in July.

The associate veterinarian said he loves being back in the Central Valley, and he and Barnes are looking to buy their first home.

And, not surprisingly, he loves being a veterinarian and seeing the connection people have with their animals.

“It’s not surprising at all what people will do for their pets,” Olstad. “They become part of your family. It’s more surprising to me when people do nothing.”