UC Merced researcher David Rheinheimer has seen the Himalayas from many angles — from his home on the Yangtze River, from the foothills as a student in India and from the Nu River in Yunnan’s Three Parallel Rivers area. 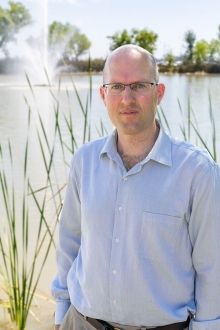 But as a 2015-16 Fulbright scholar, Rheinheimer will spend the coming year looking at the world’s highest mountain range from a new perspective — water resources management.

A postdoctoral researcher with Professor Joshua Viers, Rheinheimer works with the Center for Information Technology Research in the Interest of Society (CITRIS) and the School of Engineering on environmental engineering issues including water resources management in the Sierra Nevada.

But his yearlong Fulbright Scholarship will take him to the Indian Institute of Technology Roorkee, northeast of New Delhi, with the Himalayas as his backdrop. He’ll delve into the region’s developing hydropower industry from social and environmental perspectives and use computer modeling to generate information that resource managers can use to make long-range plans for how the industry grows.

The massive Himalaya range is home to nine of the 10 highest peaks on Earth, including Mount Everest. Major rivers, including the Indus, the Ganges and the Brahmaputra, start in the Himalayas and their combined drainage basin is home to about 600 million people. The snow and ice stored within Himalayan glaciers provide seasonal flows of fresh water for almost every major river system in Asia: the Indus, Yellow, Ganges, Brahmaputra, Irrawaddy, Salween, Mekong and Yangtze, which affect millions more.

That means the new hydropower boom in the region could affect that many people as well, Rheinheimer said.

“California’s period of hydropower development is over, but there’s an opportunity there, before the hydropower infrastructure is fully developed, to apply some of the lessons we learned here,” he said.

Rheinheimer also plans to develop methods that can be later applied in thinking about California’s water-management challenges.

As the climate warms and the glaciers in the Himalayas melt, private developers and the governments of India, Pakistan, Nepal and Bhutan are making decisions about how they are going to use those wild waters to feed their countries’ growing energy demands.

“There’s a race against the clock to find the most sustainable ways to develop — that are compatible with social and environmental goals — before the infrastructure is built,” Rheinheimer said.

More than 1,000 Fulbright scholars are named each year through the U.S. Department of State’s Bureau of Educational and Cultural Affairs. Faculty members and professionals travel to more than 155 countries worldwide in a program designed to increase mutual understanding between the people of the United States and the people of other countries.

Since its establishment in 1946 by then-Sen. J. William Fulbright, the program has provided more than 318,000 students, scholars, teachers, artists, scientists and others opportunities to study, teach and conduct research, exchange ideas and contribute to finding solutions to shared international concerns.

Rheinheimer’s work in the Himalayas will give him the chance to spend at least a month at Kathmandu University, with which UC Merced recently signed a memorandum of understanding for future research collaborations. That’s a subject Rheinheimer will also consider while he’s there.

But mostly he’ll work on his passion for contributing to the global water-resources-management dialog. He recently returned from a two-week mission in Afghanistan, where he helped train the transitioning nation’s resource managers to use a software system for water planning, and discussed different ways of thinking about resource management.

“If we can integrate better modeling with local social and environmental concerns, resource managers should be able to make better decisions about where they should implement hydropower as opposed to places where it would be too environmentally costly,” Rheinheimer said.

Viers is equally eager to extend UC Merced's reach to the Himalayas.

“As the devastating earthquake in Nepal shows, access to clean water is paramount for human societies to flourish and thus improved water resources management is necessary,” Viers said. “This prestigious assignment is indicative of how UC Merced is helping solve our most pressing problems, globally and at home.”