Helios, the start-up behind the Helios Bars – handlebars that transform any bicycle into a “smart bike” – is continuing to make its mark on the business community.

Founded two years ago by UC Merced alum Seena Zandipour and former students Tony Belmontes and Kenneth Gibbs, Helios has been named among the 100 Brilliant Companies in the June 2014 edition of Entrepreneur and Progressive picked the company to be a featured Apron Project, which recognizes companies and people who make “things a little bit better.” 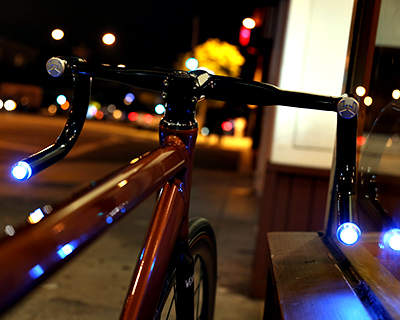 “It’s nice to make something you’re passionate about and having it noticed by influential publications and corporations,” Belmontes said.

Helios is doing more than just getting noticed, though. To date, the company has shipped out almost 1,000 handlebars with orders continuing to outpace demand. Nationwide distribution means that Helios products will soon be available in stores all over the country as well as through the company’s website.

Connected to a smartphone app, the bars use light color to tell riders how fast they're going. Built-in GPS lets riders track a ride or remember where their bike is parked. And the rear-facing LEDs can be used to signal turns, which makes biking safer.

It’s hard to believe all of this started in a UC Merced dorm room. Belmontes and Gibbs have tinkered around making contraptions together since elementary school but meeting Zandipour was their defining moment.

“Seena grew up in the Bay Area and was already making money selling websites and apps before he got to college,” Belmontes said. “He was the one to see the marketability of Kenny’s creations.”

That vision is what led the trio to take their handlebar concept to Kickstarter, raising $120,000, and then to being selected for the cutting-edge HAXLR8R program in China, which provided $25,000 in seed money, office space and mentorship.

Belmontes is headed back to UC Merced to finish the last of his graduation requirements while continuing to manage Helios as it prepares to take on investors.

“Working for yourself with your friends is a dream come true,” he said. “As long it remains that way, I’ll be doing this for a while. There is so much more we can do to improve the bike and transportation market.”