A five-year CAREER Award from the National Science Foundation is helping Professor Alberto Cerpa develop the next big breakthrough in wireless sensor networks – an autonomous, self-learning system that uses its own energy wisely.

“We need to maximize its lifetime while maximizing the amount of data being sensed, and those are contradictory goals,” Cerpa said. 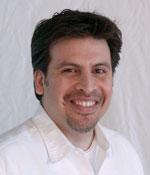 The CAREER Award is an honor for Cerpa, a founding faculty member with the School of Engineering, but it’s also more proof of the contributions UC Merced’s stellar researchers are making to sustainability and the conservation of global resources.

Wireless sensor networks have nearly unlimited applications, from monitoring the structural integrity of buildings or the amount of moisture in a canopy of trees to monitoring oncoming tsunami or a human being’s internal health.

While the uses are diverse, the need to power the networks so they can gather data and transmit it is universal.

To be most efficient, a system must learn the best times for sensing and transmitting data, and only perform those functions when sensing improves information gathering, and data transmissions have the greatest likelihood of success. That way, energy is not wasted.

But a sensor system is made up of many different “nodes,” or sensors and actuators. To be autonomous, each node must be self-powered and able to process data to hone the amount of information being transmitted. That also conserves battery life.

Energy conservation is one of the biggest challenges, because, of course, these are systems that are not constantly being monitored and recharged by humans – they are designed to function alone.

Engineers have gotten very good at making tiny sensors capable of gathering all kinds of data and performing calculations. But no one has come up with an optimized version.

That’s a project Cerpa has been working on for several years, and because of his preliminary results, the NSF is betting he can complete it in the next five years with about $550,000 in funding.

But the award isn’t just because of the importance of his current project. The prestigious and competitive CAREER Awards are also given to “support of junior faculty who exemplify the role of teacher-scholars through outstanding research, excellent education and the integration of education and research within the context of the mission of their organizations,” the NSF says.

UC Merced is no stranger to sensor networks. Cerpa and his students, including Varick Erickson, the campus energy manager, have wired up the Science and Engineering Building with a series of sensors designed to learn and predict when areas of the building will be occupied and tailor the temperature and ventilation accordingly.

His group has also developed iPhone and Android apps to allow building occupants to inform the system of their current comfort levels to improve quality of service. They have also deployed sensors on the rooftops of most campus buildings to measure solar irradiance and predict the campus’ solar array power output in the near future.

The campus is the perfect venue in which to develop an optimizer that holistically considers all system aspects to extend its lifetime and will benefit all current and future wireless sensor networks, Cerpa said.

Cerpa believes the campus can reach its Triple Zero commitment, including the goal of consuming zero net energy, partly through the use of highly efficient sensor networks that are themselves energy efficient. In addition to making the campus more sustainable, it will also save a lot of money.