Solar-paneled Canals Getting a Test Run in San Joaquin Valley 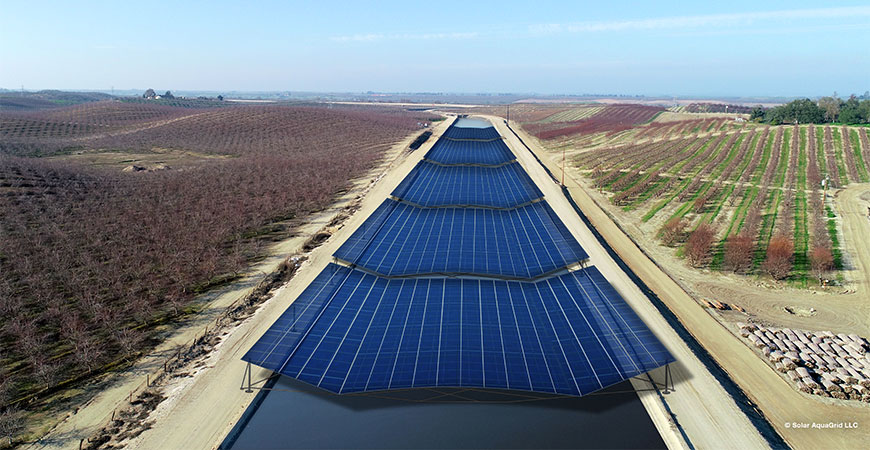 A rendering of a solar-covered canal shows what Project Nexus could look like. Image by Solar AquaGrid.

A research project conducted by a UC Merced graduate student is becoming a reality as the Turlock Irrigation District (TID) approved piloting the first-in-the-nation construction of solar panels over water canals.

The project is based on research commissioned by a company called Solar AquaGrid through the Sierra Nevada Research Institute and UC Water. Environmental engineering graduate alumna Brandi McKuin was one of the researchers who showed that covering the 4,000 miles of California’s water canals could reduce evaporation by as much as 82%, saving about 63 billion gallons of water a year. That’s comparable to the same amount needed to irrigate 50,000 acres of farmland or meet the residential water needs of more than 2 million people.

Covering all state water canals with solar installations would also generate 13 gigawatts of renewable power, equaling roughly 1/6th of the state’s current installed capacity — about half the projected new capacity needed by 2030 to meet the state’s decarbonization goals.

“Solar canals are an example of an energy-water nexus that offer multiple sustainability benefits. Using water canals for solar infrastructure conserves water while producing renewable electricity and avoids converting large tracts of land to solar development,” McKuin said. “The cooler microclimate next to the canal mitigates panel heating, which enhances PV efficiency, and shade from the panels mitigates aquatic weed growth which is a major maintenance issue.”

At its Feb. 8 board meeting, TID officially approved Project Nexus. California wants 50% of its electricity to come from renewable sources by 2030 and allocated $20 million for Project Nexus.

The project is a public-private-academic partnership among TID, the Department of Water Resources (DWR), Solar AquaGrid and UC Merced. McKuin, who studies the economic and environmental sustainability dimensions of the food-water-energy nexus and the integration of science in decision making to improve sustainable development outcomes, is now a postdoctoral researcher at UC Santa Cruz. She will return to UC Merced in April as a project scientist working with engineering Professor Sarah Kurtz , the principal investigator, to conduct several studies related to Project Nexus.

A paper McKuin and others from UC Merced wrote appeared in the journal Nature, demonstrating the advantages of solar canals, including:

But there are challenges, Kurtz said, including a higher cost of associated structures relative to output; the need for access to the canals for maintenance, which makes it difficult to deploy the modules in the most cost-effective way; and handling delivery of the electricity to a useful load.

“Let’s call each of these factors, and others, ‘key performance indicators’ or KPIs,” Kurtz said. “Working with our partners on the large demonstration projects at TID, we will quantify the KPIs.

“When you look at the cost of implementing the solar canals, the amount of electricity generated, the net change in maintenance costs, etc., what would it take for the project to be viewed as attractive enough that a canal owner would be interested in such a project?”

As they evaluate each KPI, Kurtz, McKuin and other researchers, including graduate students and a postdoctoral researcher, will also look for opportunities to innovate to improve the bottom line, including a small number of simple engineering designs that could improve access and other details. They will also map the state's canals to identify which design is most beneficial for each segment and see if there are segments that would not be good candidates for adding solar panels. In addition, engineering Professor Marie-Odile Fortier and one of her students will conduct a life-cycle assessment of the system. Engineering Professor Roger Bales , who has been coordinating the project since the research began in 2015, will also contribute to the scaling analysis, prototype analysis and communications.

A companion project on the UC Merced campus will allow researchers to make closer observations, potentially providing a way to include the Merced Irrigation District.

Groundbreaking on Project Nexus is scheduled for this fall, with completion expected in 2024 at multiple locations throughout the TID service territory in the Central Valley. The project will use existing TID infrastructure on already-disturbed land to keep costs low and efficiency high while supporting the region’s sustainable farming tradition. Additionally, energy storage will be installed to study how storage facilities can support the local electric grid when solar generation is suboptimal due to cloud cover.

“By conserving land and water while providing clean electricity with solar canals, Project Nexus has the potential to ease some of the most pressing challenges that face the Central Valley,” McKuin said. “As a Central Valley native and resident, I’m really excited to be involved in a project that is relevant to my own community.”