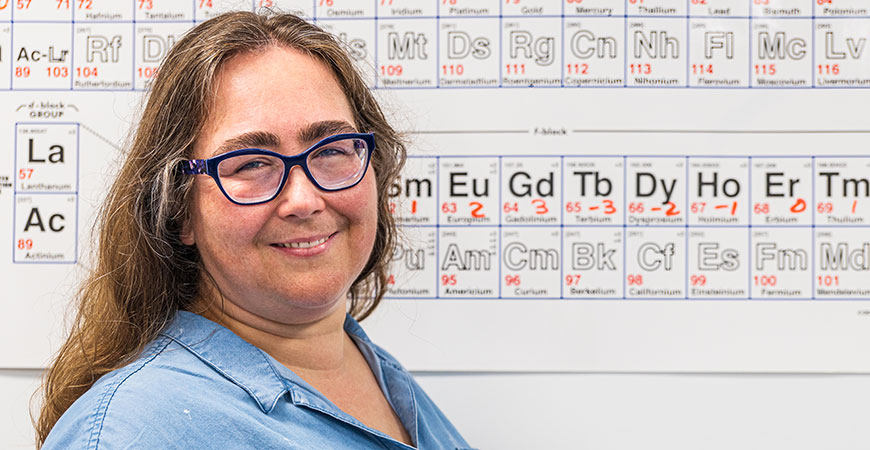 Theoretical chemist Professor Aurora Pribram-Jones has been named a Cottrell Scholar, winning one of only 24 of the prestigious $100,000 grants for her proposal entitled “Reframing Interaction in Quantum Mechanical Ensembles and Across Chemistry Learning Communities.”

This early-career award is given to physicists, chemists or astronomers in the fourth year of their faculty appointments. Pribram-Jones is only the second recipient from UC Merced. Physicist David Strubbe became a Cottrell Scholar in 2020.

Cottrell Scholar Awards are given by the Research Corporation for Science Advancement to early career scholars in chemistry, physics and astronomy. Recipients are chosen through a rigorous peer-review process of applications from a wide variety of public and private research universities and primarily undergraduate institutions in the United States and Canada. Their award proposals incorporate both research and science education.

“These exceptional teacher-scholars are chosen not just for their research and educational programs but for their potential to become academic leaders at their institutions and beyond,” said RCSA President & CEO Daniel Linzer.

Pribram-Jones said she is “deeply honored to join this stellar collection of teacher-scholars,” and has already benefitted from previous recipients who have been her educators, peers and mentors.

“I am grateful to my research group and students for their hard work and willingness to experiment with some of my more unconventional approaches in the classroom and our work together,” she said. “Most of all, I am grateful for the support of my family through a particularly difficult period in our lives. This award is a phenomenal tribute to all of you and how your multigenerational lessons form the scaffold of my work: Science is done by everyone, and learning happens everywhere.”

Pribram-Jones’ research group is working on a new method for determining the structure and properties of many-electron systems such as atoms and molecules. For many years, physicists, chemists and materials scientists have used density functional theory (DFT), a computational quantum mechanical method. But it is not accurate enough for some quantum features, including properly describing strong electronic interactions, which is vital to understanding chemical reactions and physical properties.

Her group is enhancing a newer approach in density functional theory, called the strictly correlated electron approach. It’s already used at near-zero temperatures, but her group is focused on how to use it at warmer temperatures, when higher-energy states of electrons matter more because the thermal energy of the system lets some electrons hop up into higher-energy states.

“The interplay of temperature and interaction strength in electronic systems is complicated, so we — so far — do this very carefully with simple models we can solve exactly using math on paper or computers,” Pribram-Jones said. “We hope to develop this in ways that help us make useful approximations for more realistic molecular or materials systems. Doing that could help other scientists better describe a whole range of complicated things such as the centers of planets, fusion experiments, transition metal oxides and high-temperature superconductors.”

Her proposal also includes an educational component, which she hopes will encourage meaningful interaction between student populations and nourish burgeoning scientific identities.

She plans to build a computational project that brings together teams comprised of introductory STEM students, junior and senior chemistry undergraduates, and early-stage graduate students in theoretical chemistry and physics to work on a program of quantum mechanical, classroom-based research on local water contaminants.

“Though the students at different stages will have different roles in the projects, it is meant to help all of them learn about educational pathways and see themselves more firmly as scientists,” she said. “Working as a scientist is not removed from our identities as folks in Merced or the Central Valley. I want students to get the message that being a scientist is intertwined with being human and all that entails. That can help some of us who don’t always see ourselves in cultural messaging about what scientists look like or where they come from.”

Pribram-Jones is a member of the Department of Chemistry and Biochemistry in the School of Natural Sciences, the Center for Chemical Computation and Theory at UC Merced and the Consortium for High Energy Density Science, led locally by physics Professor David Strubbe. She and Strubbe also founded the UC Merced Bridge to Research Program, which has supported multiple undergraduates in getting research experience and mentoring to better prepare them for opportunities as senior undergraduates.