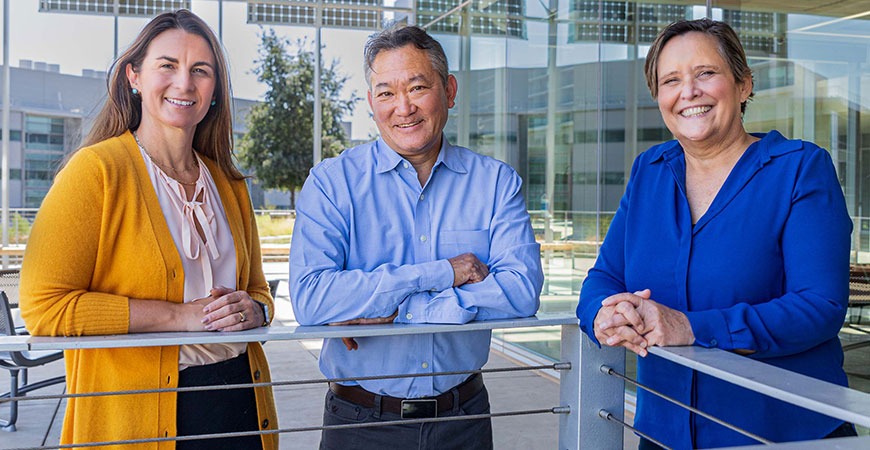 Cartilaginous fishes such as sharks and skates have a sixth sense, but it’s not ESP — it’s electrosense. Such fishes use hundreds or thousands of specialized organs to sense prey and mates and to navigate the oceans.

A cross-disciplinary group of researchers at UC Merced is making new discoveries about the fundamental structure of the organs and how this structure may provide clues as to how this sixth sense works.

“These animals ‘see’ electrical fields, but we don’t know how,” said Professor Linda Hirst, who studies soft materials that self-organize.

She, biology Professor Chris Amemiya and engineering Professor Valerie Leppert are collaborating to analyze a gel that fills these fishes’ Ampullae of Lorenzini (AoL), electrosensing organs that are readily visible on the surface of the fishes’ skin.

Each organ itself resembles a biological wire, with one end situated in the skin. The other end is a bulb-like structure that ultimately connects to the brain via nerves. The “black box” in this detection system is the soft gel that extends the length of the organs and provides the conducting material for the biological wires.

“Sharks use their electrosense to draw topographical maps of their surroundings the same way we use our eyes,” Amemiya said. “They detect changes in electric fields from biological sources and also navigate using Earth’s geomagnetic field.”

Working under a seed grant from the Faculty Senate’s Committee on Research, the researchers have begun to break down the gel’s components to better understand the functions of the proteins and other molecules comprising the watery gel. The gel seems to exist as a colloid, like mayonnaise, gelatin or muddy water — particles are suspended in a dispersing medium.

Their new paper in the interdisciplinary open access journal, iScience, explains the latest findings about the gel, its structure and its functions.

The collaboration between the disciplines brought together School of Natural Sciences professors Amemiya, in the Department of Molecular Cell Biology, and Hirst, in the Department of Physics — both members of the Health Sciences Research Institute — with Leppert, in the Department of Materials Science in the School of Engineering. Leppert’s background in electron microscopy and nanomaterials might not seem like a fit with biology and soft matter. But her lab has worked on biology research in the past, and she and her grad students were happy to be part of this study, as well.

“Increasing our fundamental knowledge can advance technology that can help people,” she said. “These transdisciplinary collaborations are what solve mysteries,” Leppert said.

The paper’s first author is Molly Phillips, a former graduate student in Amemiya’s lab, who recently received her Ph.D. from the University of Washington and moved with Amemiya from Seattle in the fall of 2017. Co-authors include Physics graduate student Alauna Wheeler, who contributed to the X-ray work at the Advanced Light Source at Lawrence Berkeley National Laboratory, Materials and Biomaterials Science and Engineering graduate student Matthew Robinson, who contributed to the scanning electron microscopy work, and electrical and computer engineering Professor Marco Rolandi and his graduate student Manping Jia, with the UC Santa Cruz Baskin School of Engineering, who provided the facilities and technical expertise for the proton conductance measurements.

To better understand the functional contributions of the gel’s components, the researchers looked closely at its properties: fine microscopic structure, X-ray scattering and proton conductivity. The finding that the gel is largely colloidal in nature was quite surprising. But an equally surprising finding was that the gel works even without the proteins in it.

The proteins, it turns out, help maintain the gel’s viscous nature, allowing it to fill the AoL and remain there.

The findings lay the groundwork for more detailed studies into the specific interactions of molecules inside AoL gel at the nanoscale, leading to a better understanding of how it works and what other applications it might have.

“If we can understand how this material works, it may lead to new sensing technologies,” Hirst said.