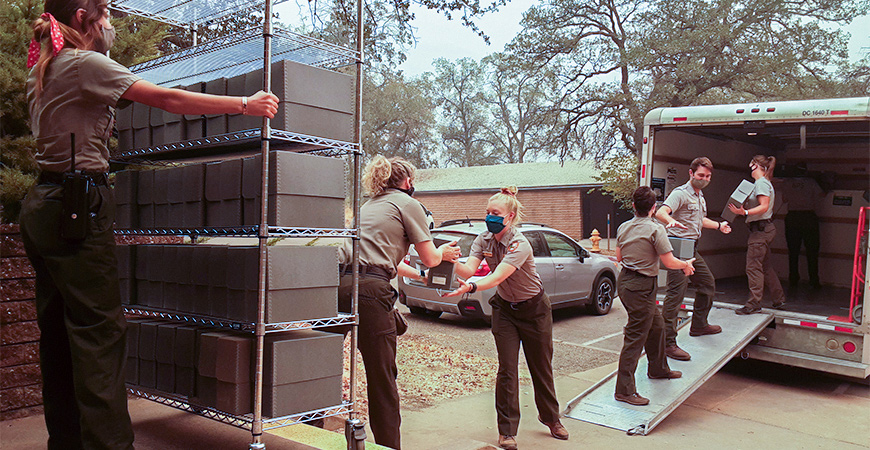 Ward Eldredge warily monitored the fire’s progress. As curator of the archives of the Sequoia and Kings Canyon National Parks, he deliberated what would need to be done if the nearby Castle Fire continued its approach toward the parks’ headquarters.

The air around Three Rivers grew thick with smoke. It was looking bad.

Residents of the Sierra Nevada foothills community spent the weekend of Sept. 12-13 preparing to evacuate. And, if the fire reached the town, Eldredge reasoned, “it’s only five more miles up canyon before we get to headquarters.

“That’s when everybody started looking at this very closely — the idea that the fire might reach the headquarters complex,” he said. “If that’s the case, there’s going to be a whole bunch of things at risk.”

The archives contain the 130-year history of Sequoia, the country’s second-oldest national park: documents dating to its founding; tens of thousands of photographs and negatives; early journals of guides and rangers; plant samples of every known species; and a collection of precious baskets from the Yokuts, some of the land’s earliest inhabitants.

All of it was at risk. To save it, quickly and safely, Eldredge turned to a relative newcomer on the landscape — the 15-year-old campus of UC Merced. 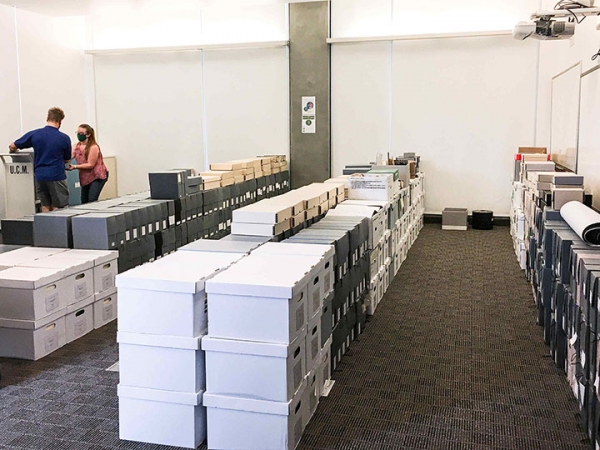 As park rangers and other local residents evacuated their homes the afternoon of Sept. 14, Eldredge called Emily Lin, the UC Merced librarian whom he knew from work digitizing collections from the parks’ archives.

He asked, “is there any chance we’d have the means of housing the collections at the library?” Lin said.

The next morning, Lin and her colleagues agreed they could help. Fortunately, a temporary space in the Leo and Dottie Kolligian Library had just opened up due to the completion of the Merced 2020 Project, the major campus expansion.

“We said ‘why don’t we make sure the collections are secure? We have this window of time to evacuate them: Let’s just do it,’” Lin said.

Finding vehicles to transport the archives, however, was another problem. With the community evacuating, Eldredge could find only one rental truck nearby. UC Merced’s facilities team provided another truck and the National Park Service supplied a van.

Early on the morning of Sept. 16, UC Merced staff set out on the 150-mile drive to the parks’ headquarters. There, as ash fell steadily from the sky, they and park staffers worked throughout the day to load up the parks’ history, carefully filling the van with delicate items such as the baskets, a photo collection of about 3,500 images from the Grant Grove area and glass plate negatives.

“The 15-foot U-Haul was filled with archival boxes stacked floor to ceiling,” Eldredge said. “Sequoia was the second park in the nation. It predates the existence of the park service. We have this complete record of what a national park is, what a national park could be, how it has changed over the course of the 20th century. That story is told in this really fascinating documentary record.”

The artifacts include documents from the Mather Mountain Party , a group of influential figures led by industrialist and conservationist Stephen Mather, whose 1915 trek into the Sierra was instrumental in creating the National Park Service the next year.

“That trip was in Sequoia National Park,” Eldredge said. “We have a photo album that was assembled and belonged to one of the participants, Mark Daniels.”

There are photo albums documenting the Civilian Conservation Corps at the end of the Great Depression; park budgets and manager logs; the diaries of individual rangers who spent summers in back country cabins; administrative correspondence with outside agencies such as the Sierra Club; and wildlife observations, including all manner of bear incidents.

“Essentially, anything that happened in Sequoia and Kings Canyon,” he said. “It’s hard to exaggerate the breadth of the records.”

Having the help of UC Merced, he said, enabled them to move 12 herbarium cabinets — large metal cases — holding the parks’ collection of 8,000 plant samples known as “vouchers,” which Eldredge said are “the ultimate proof that something is here.”

“With the changing ecosystems,” he said, “it’s really important to have that physical, tangible proof.”

As the team prepared to leave Three Rivers, Eldredge said, “I was so shattered because it had been multiple days of stress.”

“There were several lucky breaks — a compounding of good fortune. And a whole bunch of that was just the good will of UC Merced. Just utterly and completely. There were parts of the collection that we wouldn't have been able to get out without their help.”

“The partnership with UC Merced is special. UC Merced is a good resource for digitizing our archives and making them broadly available for research by students."