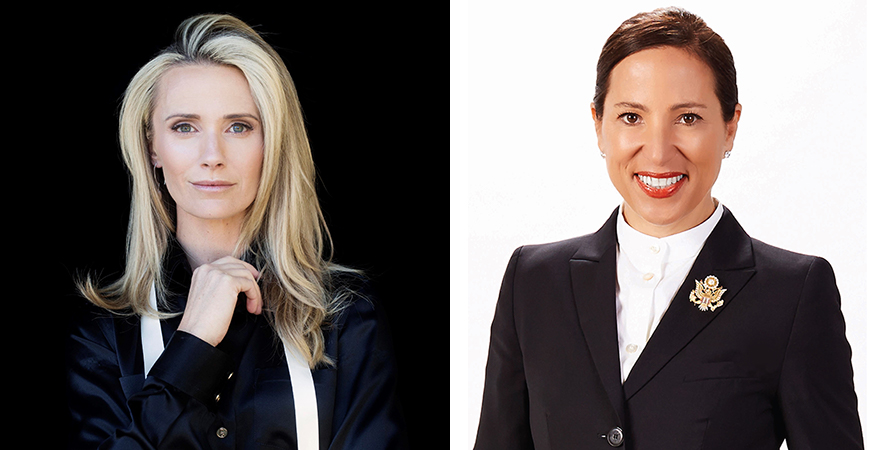 Two of the state’s leading political figures will make their return to UC Merced to serve as keynote speakers at the university’s 14th commencement exercises in May.

Jennifer Siebel Newsom, California’s First Partner, and Eleni Kounalakis, the state’s first female Lieutenant Governor, will address more than 1,300 graduates and their families over two ceremonies May 18-19. The Class of 2019 will be the largest in UC Merced’s history.

“We are honored to welcome to campus these two trailblazing women — who have forged successful paths in business, politics, and the arts — and who will serve as an inspiration to the thousands of students now entering the next stage in their lives,” said Chancellor Dorothy Leland. “The Merced community looks forward to celebrating the accomplishments of our largest-ever graduating class with them at this major milestone in their educational journeys.”

Siebel Newsom will speak to graduates from the Schools of Natural Sciences and Engineering on Saturday, May 18.

This is Seibel Newsom’s second time visiting the campus. She and her husband, Governor Gavin Newsom, visited in October, and the two spoke with students about their experiences as young adults in the current world climate. Governor Newsom gave a shout-out to a UC Merced student in his victory speech.

A California native, Siebel Newsom is a documentary filmmaker, actress and advocate. She founded the nonprofit organization The Representation Project, which inspires individuals and communities to challenge and overcome limiting gender stereotypes and norms.

Siebel Newsom graduated with honors from Stanford University and Stanford’s Graduate School of Business. Among other award-winning projects, she wrote, directed and produced the award-winning documentary “Miss Representation,” which premiered at the 2011 Sundance Film Festival and examines misrepresentations of women by the media. Siebel Newsom is currently working on another film, “The Great American Lie.”

“It is an honor to address graduates of the class of 2019 and to congratulate them on their tremendous achievements at this pivotal point in their personal and academic lives,” Newsom said. “On my visit to campus last fall, I observed firsthand how accomplished, hard-working, and thoughtful the community at UC Merced consistently strives to be. California is lucky to have such bright minds leading us into the future.”

We are honored to welcome to campus these two trailblazing women — who have forged successful paths in business, politics, and the arts — and who will serve as an inspiration to the thousands of students now entering the next stage in their lives. The Merced community looks forward to celebrating the accomplishments of our largest-ever graduating class with them at this major milestone in their educational journeys.

On Sunday, May 19, Lieutenant Governor Eleni Kounalakis will make her return to campus to share her journey from businesswoman to the state’s first female lieutenant governor with graduates from the School of Social Sciences, Humanities and Arts.

Kounalakis visited UC Merced in August as part of a statewide tour. Before assuming her current position, she served as the U.S. Ambassador for Hungary under President Obama from 2010-2013.

Kounalakis is not a stranger to the UC system. Born in Sacramento, Kounalakis received her MBA from UC Berkeley and holds a bachelor’s degree from Dartmouth College. She also holds an honorary Doctorate of Laws from American College of Greece. Kounalakis began her political career as a staff member for the California Democratic Party in 1992. She also spent 18 years with her family business, AKT Development, rising to president of the company as she helped deliver housing for middle-class families in Sacramento.

“I could not be more proud to address the class of 2019 at this year’s commencement ceremony,” Kounalakis said. “In a short amount of time, UC Merced has achieved so much, including expanding educational access to the San Joaquin Valley and to all of California’s underserved populations. The campus’s resolve to continuously reach new milestones in scholarship and research is reflected in its inspiring faculty and students, and it is an honor to be welcomed into the Merced family as this year’s graduates prepare for the next chapter of their lives.”