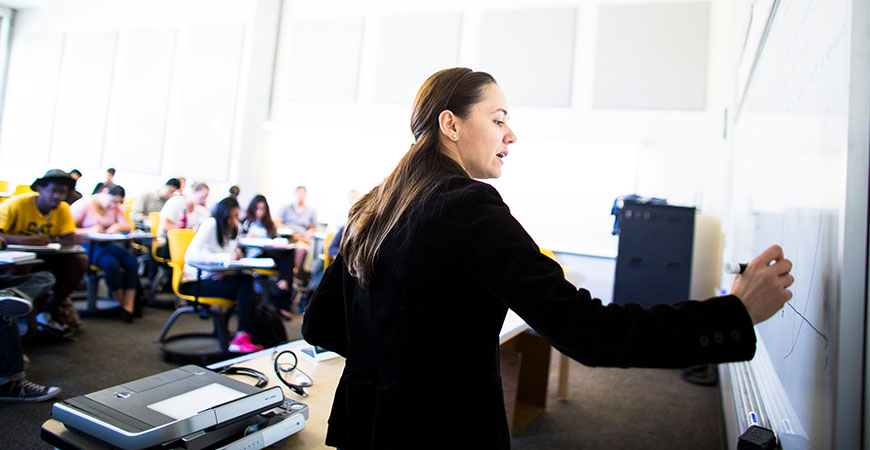 Math at UC Merced isn’t exactly like math at most other universities.

Sure, there are parabolas and equations, orders of operations and cosines, but at this campus, those lead into topics such as Mad Cow Disease, coral photosynthesis and a crab’s sense of smell.

The Department of Applied Mathematics is increasingly being recognized for its interdisciplinary work, commitment to gender and ethnic equality, its embrace of modern approaches to solving big questions and its innovative, collaborative approaches to teaching and developing students across campus.

From its earliest days, Applied Math at UC Merced has been pushing boundaries.

“We are an oddity, as far as math departments go,” said Professor Suzanne Sindi , whose work spans biology and math as she researches prion diseases, such as Mad Cow Disease, in humans. Before joining the campus in 2014, she interviewed with computer science groups and biology departments, but found her “intellectual home” at UC Merced.

“Someone like me wouldn’t really exist elsewhere, because my work is so interdisciplinary. A ‘normal’ math department wouldn’t have a fluids lab,” she said with a smile. “In my lab, we’re trying to unlock mysteries that are deep within biological systems. My colleagues (in the department) might not do the same work, but they appreciate and respect my work. They think it’s cool.”

The department’s willingness to buck convention is on display again as it moves forward with an effort to engage math students on an unprecedented level — inspired by UC Merced’s student population, which is nearly 75 percent first-generation.

Professor Arnold Kim and his colleagues secured a $2.1 million grant from the National Science Foundation (NSF) for the next five years, with which they’re launching a new learning effort this fall. The grant is part of NSF’s Research Training Groups (RTG) in the Mathematical Sciences program, which aims to enhance the nation’s scientific competitiveness by increasing the number of well-prepared college graduates who pursue careers in the mathematical sciences.

The goal is to improve research training by involving undergraduate students, graduate students, postdoctoral associates and faculty members in structured research groups centered on common themes. At UC Merced, that means a department-wide effort that all faculty are participating in, along with faculty from other disciplines.

Kim and his colleagues said the efforts are inspired by the students themselves.

“There’s something rather magical about our students and our campus,” he said. “We’re all growing up together here, and it has created this bond. Everyone who has joined this campus took a chance to come here, and that has made us a community.”

"Someone like me wouldn’t really exist elsewhere, because my work is so interdisciplinary. A ‘normal’ math department wouldn’t have a fluids lab. In my lab, we’re trying to unlock mysteries that are deep within biological systems. My colleagues (in the department) might not do the same work, but they appreciate and respect my work. They think it’s cool.”

The initiative builds on the principles of the Data-Enabled Science and Computational Analysis Research, Training and Education for Students (DESCARTES) Program, founded in 2013 by Kim, Professor Roummuel Marcia and teaching professor Yue Lei through an $880,000 award from the NSF. DESCARTES’ goal was to engage high school and college students and teachers in big-data analysis.

“Students thrive when they are engaged as part of a community,” Kim said. “We’re expanding on the DESCARTES principles of community learning, mentorship, preparation for careers and tracking progress.”

Starting this semester, applied math students will become part of one of four faculty-led teams: mathematical biology; energy and environmental mathematics; imaging and sensing; and scientific computing. Each team will have postdoctoral and graduate student mentors, meet regularly, hold workshops and events, and monitor students’ progress. The students will prepare for advanced degrees and/or careers, get networking opportunities and conduct interdisciplinary research that will help them prepare for life after college, including careers outside of academia.

That was a principle of the DESCARTES Program, Kim said, and students have gone on to careers at NASA, Goldman-Sachs, and in politics and bioinformatics.

Mario Banuelos, who earned his doctorate in applied math in 2018, is now a tenure-track professor at Fresno State. He served as a graduate student mentor for a group of DESCARTES students, leading summer sessions and helping teach a variety of topics including statistics, data science and other mathematical concepts.

“DESCARTES provided me an opportunity to work with a variety of students,” he said. I gained a lot of experience mentoring students, as well as practice developing research projects for students.”

Banuelos said the program helped prepare him for his career, which has long been a goal of the Applied Math department, Kim said.

“By the time they leave here, students are very savvy about their college careers, and prepared for their professional lives,” Kim said. “We’ve always had a strong sense of our responsibility to students, to make them feel supported and welcome.”

“There’s something rather magical about our students and our campus. We’re all growing up together here, and it has created this bond. Everyone who has joined this campus took a chance to come here, and that has made us a community.”