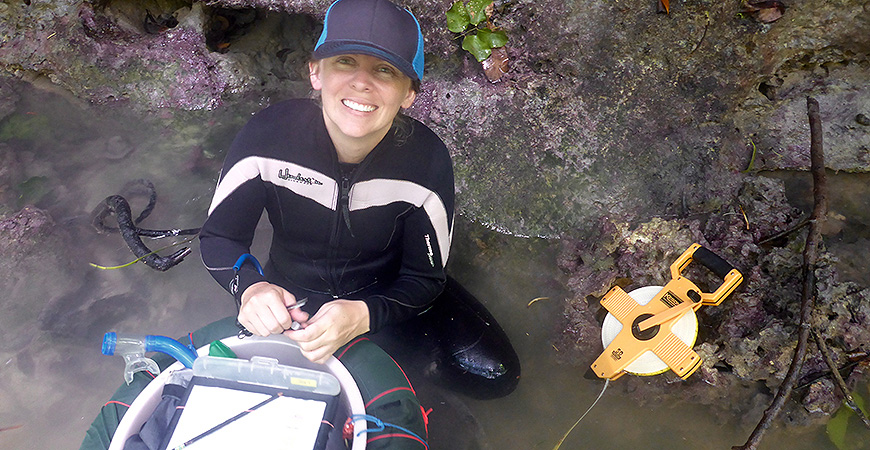 Lauren Schiebelhut is putting what she learned at UC Merced to take her research career to the next level.

Lauren Schiebelhut credits the support and opportunities afforded to her at UC Merced with opening the door to her research career.

Schiebelhut — a first-generation transfer student from Fresno — earned a bachelor’s degree in biological sciences from UC Merced in May 2009 but was uncertain about her future.

The last semester of her senior year, she took an evolution course with Professor Mike Dawson and her standout performance prompted him to offer her a lab manager position. She was involved in a California rocky shore project that played a pivotal role in jumpstarting her passion for research.

“I was able to participate in that project and I just fell in love with trying to solve the mysteries in marine systems,” she said. “It also exposed me to what it meant to get a Ph.D. — what it involved and the doors it could open for me.”

In 2010, Schiebelhut began her graduate studies in Environmental Systems at UC Merced with Dawson as her mentor.

“Lauren built her graduate thesis research out of opportunistic work as a technician on a side project,” Dawson said. “She saw an opening to answer an interesting question and put in the creative thought and hard work that was required to start building a world-class dataset.” 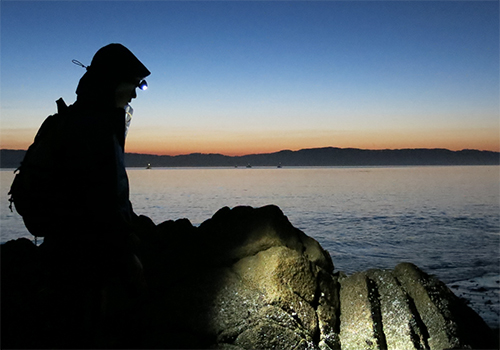 Most of Schiebelhut's doctoral fieldwork was done on rocky shores in California.

Schiebelhut studied the impacts of mass mortality events — one such event was caused by sea star wasting disease. She sampled sea stars up and down the coast before and after the epidemic and identified genetic changes associated with survivors of the disease. This work highlighted the potential for rapid evolution and has been published in Proceedings of the National Academy of Science and featured in the New York Times.

“Her research provided the foundation for a collaborative National Science Foundation grant proposal to explore the genomic consequences of wasting disease for the long-term fitness of sea stars,” Dawson said.

The skills I learned at UC Merced are giving me an edge. These skills helped me to move into a postdoc position and hit the ground running because I’m prepared to just figure out what I need to do to achieve my goals.

Opportunities at UC Merced helped her build valuable research skills and connect with a greater research community, she said.

Now as a postdoctoral scholar in the Department of Evolution and Ecology at UC Davis, Schiebelhut is researching the genomics of eelgrass (Zostera marina) — an important habitat building species that grows in bays in the North Atlantic and North Pacific.

“I’m trying to better understand the relationship between the genomics of Zostera and different environmental factors for potential signals of selection,” she said. “We just started a new study that will allow us to link genomic variants with environmental characteristics across environmental gradients in Bodega Bay and Tomales Bay.”

The results of this research, being conducted with UC Davis professors Rick Grosberg, Jay Stachowicz and Rachael Bay, could advance understanding of general processes and interactions that shape population genomic structure in coastal ecosystems and inform future research and applications.

“The skills I learned at UC Merced are giving me an edge,” Schiebelhut said. “Starting on a campus when it was young, I had to learn how to solve problems and overcome obstacles. These skills helped me to move into a postdoc position and hit the ground running because I’m prepared to just figure out what I need to do to achieve my goals.”

Her dream is to work at a Research I university, and she could begin applying for faculty positions later this fall. Until she lands her perfect job, she will continue to soak up all that her mentors have to offer.

“I wouldn’t be where I am today without the mentors I’ve interacted with throughout my academic career,” she said. “Having people take the time to chat with me and open doors and make connections has really made all the difference.”