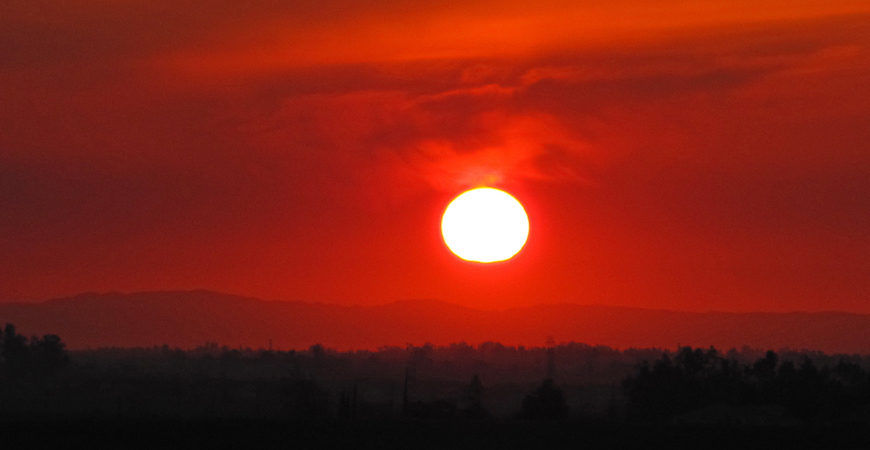 Sunset over the Coast Range as seen from Kolligian Library. (Photo: Christopher Viney)

As the frenzy surrounding the Aug. 21 solar eclipse begins to peak, physics Professor Wil van Breugel is using the opportunity to give Merced stargazers a crash course in the science and history of these astronomical curiosities.

“It’s important for people to fully appreciate the science,” van Breugel said. “This is an opportunity to try to explain things more fundamentally.”

An astrophysicist and lifelong educator, van Breugel recognizes that “astro-” inspires as much awe as “-physics” inspires anxiety. But van Breugel insists there’s no reason to fret. The fundamentals of solar eclipse science are surprisingly uncomplicated.

“A solar eclipse occurs when the moon is directly between the Earth and the sun,” van Breugel explained.

When light can’t pass through a solid object, the object casts a shadow opposite the light source. Take, for example, a beach umbrella. Sunlight shines on the umbrella but can’t penetrate the umbrella’s surface, so a shadow darkens the ground where light would otherwise have touched down.

The moon casts a similar shadow. And since the sun always shines, the moon’s shadow is always present. However, the Earth is not always in the shadow’s path. The darkening experienced during a solar eclipse is the Earth entering that shadow. But only a small fraction of the Earth’s surface experiences any perceptible dimming.

“Depending on where you are, the sun may be partially or entirely blocked by our moon,” van Breugel said. “For this eclipse, there will be a 60-mile-wide band that starts in Oregon and ends in South Carolina where you can see a full eclipse. But you can see a partial eclipse everywhere from San Diego to Canada, including Merced." 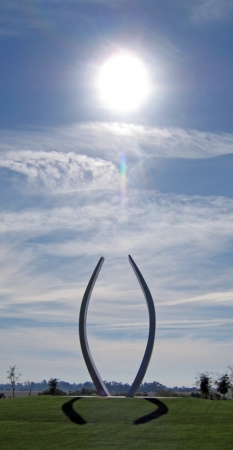 The sun in alignment with Beginnings as seen from the Carol Tomlinson-Keasey Quad. This particular alignment occurs only twice per year. (Photo: Christopher Viney)

From the vantage point of Merced, the moon will obscure 74 percent of the sun’s diameter at eclipse maximum, leaving just a quarter of the sun exposed. Even then, Merced won’t go dark.

“The eclipse will be here, but the sun is so bright that you might not be able to tell when you look around,” van Breugel said. “It might just seem fainter.”

But van Breugel includes cautionary advice in his message. He warns skygazers, even those experiencing a total eclipse, never to look at the eclipse without first donning specialized protective eyewear (sunglasses are not sufficient). He also urges those in search of eyewear to beware of swindlers eager to capitalize on eclipse mania.

“Some people are selling fake glasses online,” van Breugel said. “But if you have a friend with welding equipment, a welder's mask would work.”

Christopher Viney, a materials science and engineering professor who moonlights as an accomplished photographer, has advice for shutterbugs in search of the perfect eclipse photo. Viney recommends using a very dense neutral-density filter to shoot the eclipse. This prevents overexposure while also protecting the camera.

“An 18-stop filter with an optical density of around 5.4 will allow for an exposure that captures the edge of the moon’s shadow within the shutter speed range of a standard camera,” Viney said.

But like van Breugel, Viney warns against looking directly at the eclipse, even through a camera fitted with a lens filter.

Van Breugel also adds that trips from Merced to the dark zone — areas where the eclipse will be total — might be problematic. Lodging has been booked for months and roads to and from the dark zone will be jammed.

“It’s estimated that as many as 7 million people in the U.S. will be driving into the dark zone,” van Breugel said. “If you’re near a densely populated area, going to the dark zone might be a traffic nightmare.”

Those in Merced interested in eclipse-watching can take a mid-morning break to look skyward. The eclipse begins at 9:03 a.m. and ends at 11:41 a.m. It reaches its maximum at 10:18 a.m., when the moon obscures three-quarters of the sun’s diameter.

Additional information on the science and history of solar eclipses, as well as short index of eclipse-related links hand-selected by Professor van Breugel, can be found here.