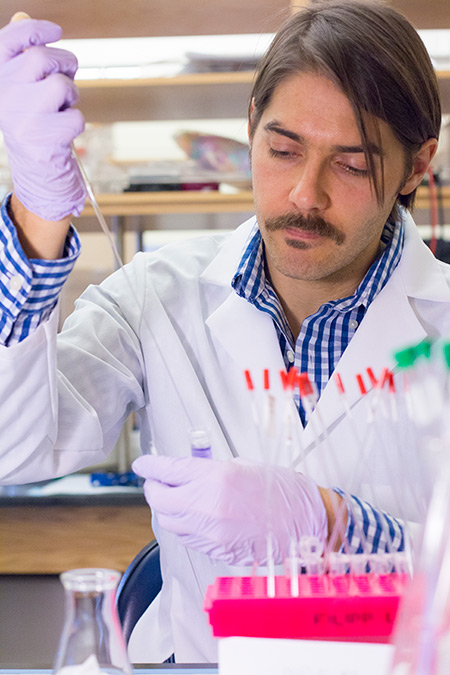 The National Cancer Institute’s “cancer moonshot” tasks researchers with, among advancing other new biotechnologies, delving into immunotherapy and epigenomic analysis.

Filipp has already mapped the genetic landscape of melanoma and found a drug that could be effective in battling the deadly skin cancer, and has now identified the gene and hormone combination that triggers lethal prostate cancer.

“The essence of precision medicine is to understand which drug targets are effective given each person’s unique genetic and epigenetic makeup,” Filipp said.

What many people don’t know is that there is more to the genes than what we might see molecularly.

“There is a hidden layer of regulation controlling the activity of genes without changing the core code of our DNA. This field of study is called epigenetics,” he said.

Filipp’s approach to precision targeting shows that if researchers can regulate hormone receptors and epigenetic factors at the same time, they can control cancer.

“That’s why molecular understanding of epigenetic mechanisms underlying the development of cancer is of critical importance,” he said.

The articles detail his work into androgen-insensitive and androgen-responsive prostate cancer. Steroid hormones such as testosterone and estrogen play critical roles in human development but also can contribute to disease if dysregulated.

“Professor Filipp’s research is important, and we’re proud of the advances he has made,” School of Natural Sciences Dean Juan Meza said. “His work is going to help take precision medicine to the next level.”

One important finding is that the hormones’ counterparts, hormone receptors, have tunable activity levels and rely on being able to recruit epigenetic factors (compounds that attach to — but don’t change — DNA) to regulate gene activity levels.

Filipp’s Systems Biology and Cancer Metabolism Lab in the School of Natural Sciences, affiliated with the Health Sciences Research Institute at UC Merced, identified such an epigenetic factor, which the researchers named Jumonji because of its “magical and mysterious roles in cancer and cellular development.”

The researchers demonstrated that Jumonji teams up with the androgen hormone receptor and together they “mistune” cellular programming in prostate cancer. That mistuning is often responsible for treatment-resistant malignancies.

Jumonji not only affects how an entire network of cancer genes behaves, it actually takes on the role of a cancer gene and brings about uncontrollable growth.

“Prostate and breast adenocarcinomas (tumors) are malignancies tightly linked to our own hormone systems,” Filipp said. Prostate and breast cancer are among the most common malignancies in Americans. Localized tumors are often curable through surgery, but the primary treatments for metastatic, or advanced, cancer are chemotherapy or hormone-deprivation therapy. However, neither guarantees success.

Despite initial positive responses to therapy, resistance almost invariably develops in advanced prostate cancer because of genomic changes in the hormone receptors. Once that happens, the cancer can become lethal.

“Epigenetic modifiers have the ability to modulate our genetic readouts — they can emphasize or silence genes,” Filipp said. “If an epigenetic modifier is dysregulated in cancer, it might switch on oncogenes or shut down tumor suppressors. Both events will transform cells into tumor cells. In addition to genomic changes, epigenomic changes also contribute to the ability of cancer cells to evade therapy.”

“We are all proud of Professor Filipp’s accomplishments,” Vice Chancellor for Research Samuel Traina said.  “He exemplifies the attributes of a great UC professor.”

In research science, Filipp is especially concerned with promoting advanced graduate training and student mentoring. Filipp has developed the first advanced training course on systems biology, cancer metabolism and metabolic flux analysis for graduate students in the Quantitative Systems Biology group at UC Merced, where he brought guest speakers from Europe. Last year, he promoted hands-on training in cancer systems biology for UC Merced undergraduates and Merced high school students, and plans to do the same this year.

“It is a special fulfillment to foster young careers and see our research talent grow in the Central Valley of California,” Filipp said.