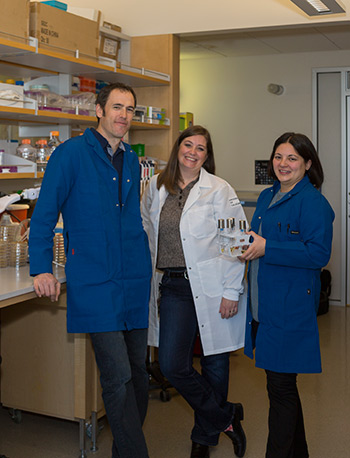 Researchers at UC Merced are playing key roles in the new UC Valley Fever Research Initiative, studying how the Valley fever fungus, Coccidioides immitis, causes disease in its mammalian hosts, and identifying the genes involved in this process.

School of Natural Sciences professors Clarissa Nobile, Katrina Hoyer and Aaron Hernday are part of an effort led by UC San Francisco scientist Anita Sil through the UC’s latest round of Multicampus Research Programs and Initiatives (MRPI) grants, providing more than $17 million in funding for 15 initiatives.

The study, which was awarded $1.7 million in January, leverages the expertise of UC researchers from Merced, Berkeley, Riverside, San Diego and San Francisco to address Valley fever, a significant public health issue in California’s Central Valley.

These three UC Merced researchers and other affiliates of the campus’s Health Sciences Research Institute have been investigating Valley fever, but little is known about the biology of the soil-borne fungal pathogen that causes the disease. However, its effects are far-reaching: Over the past decade, hospitalizations from Valley fever have cost patients and taxpayers more than $2 billion, and incidence of the disease is on the rise.

The UC is particularly well-suited to undertake this work because it has special biosafety laboratory facilities for handling such pathogens. Such facilities are available in San Francisco and at other campuses, and are in the plans for the Merced 2020 Project expansion, Hernday said.

Nobile, the lead on the project at UC Merced, said the advantages of the multicampus approach are many.

“It allows us to come at the problem from all different angles. Our group has fungal biologists, computational geneticists, immunologists, and researchers from many other disciplines. For the researchers who are newer to the field, this is a great chance to work with the top experts,” she said.

The UC Merced researchers will work with a library of C. immitis strains from Bridget Barker’s strain collected at Northern Arizona University, which include strains from all over the Southwest, the area most heavily affected by Valley fever.

“It tends to be found in hot, dry areas, or areas that are seeing new construction after being untouched for a long time,” Hoyer said. “We are seeing Valley fever cases on the rise in the Central Valley. One possible reason could be the increase in people that are moving here from outside the Valley.”

“We don’t just find the Valley fever pathogen in the soil; it’s found in high concentrations in places where rodents have lived and died,” said Hernday, a biomolecular scientist.

Valley fever is spreading to other areas now, too, being found in some animals in eastern Washington and Oregon, and in people in the East Bay Area.

“And it’s likely only going to get worse with climate change,” Nobile said. “The warmer summer temperatures followed by winter rains provide ideal opportunities for this fungus to spread in the environment.”

UC Merced’s scientists will sequence genes and help figure out why different strains of Valley fever have different degrees of virulence. Hoyer, an immunologist, said looking at the different variants could help lead to more effective treatments.

The Valley fever fungus can change shapes/forms, called morphologies, depending on its environment. One morphology of this fungus is airborne, and the UC Merced team will examine the transition the pathogen makes from its form in the soil to the form it takes as it sets up microbial communities in people’s lungs.

The four-year grant will help build on the base of knowledge about Valley fever, cement collaborations and make researchers more attractive to other granting agencies because of the concentration of expertise focused on this disease.

MRPI grants are aimed at faculty members who are advancing cutting-edge research in topics important to UC, the people of California and the state’s environment and economy, and are training UC students in emerging fields of scholarship.

The Valley fever project is one of 15 interdisciplinary projects that the university is funding in 2017. The grant awardees were announced in early December. The winning research projects were selected by peer review from a pool of 97 applications in a highly competitive grant review process. The funded portfolio spans the breadth of university scholarship, including arts and humanities, health, social and physical sciences, and engineering.