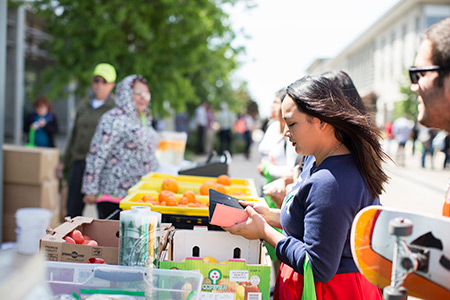 UC Merced is relaunching its branch of the Blum Center for Developing Economies with a focus on food security for the first two years of the faculty-led effort.

Economics Professor Kurt Schnier, with the School of Social Sciences, Humanities and Arts, and Karina Diaz Rios, a nutrition specialist in the UC Cooperative Extension, will lead the rejuvenated Blum Center with administrative help from the Health Sciences Research Institute (HSRI).

They hope to make the Blum Center a hub for all food-security-related research and outreach on and off campus.

“We want to create a community on campus to address issues of food security,” Schnier said. “We want to help engage students, faculty members and the community to have a direct effect on people’s lives.”

Plans include bringing speakers to the campus and community; supporting efforts such as the campus food bank, which serves students and others who don’t always have enough food; helping support student researchers such as the students who serve as UC Global Food Initiative fellows; and facilitating — including through small grants — faculty research centered on food, including research into communicating about food, research into food-related topics like diabetes, and into food and social justice issues.

“We’re hoping to help translate research into projects that are relevant to the community,” Diaz Rios said.

Merced County’s economy is largely based around agriculture, yet many people here do not have adequate access to food or information to help them make healthy choices.

“Our translational research center will help connect with local audiences to help people make practical sense of research in their lives,” said Professor Paul Brown, director of HSRI. “In my mind, the Blum Center should be trying new things in the community to intervene.”

Vice Chancellor for Student Affairs Charles Nies said his office will be involved in the relaunched Blum Center, too, through projects such as the community garden, the Sprouts Program, which teaches younger children about food production and nutrition, and the Produce on the Go food truck that visits campus each week to bring farmers market offerings to the Bobcat community. Student Affairs also has emergency funds for students in need, offers food vouchers for the produce truck and offers a program through which students can donate meals from their meal plans to fellow students.

In 2013, a $400,000, two-year seed grant through the University of California allowed UC Merced to start its branch of the Blum Center, then themed “Global California: The World at Home.” The UC Merced initiative is affiliated with the Blum Center at UC Berkeley, which was founded by a gift from investment banker and UC Regent Richard C. Blum.

There are Blum Centers on several other UC campuses, including UCLA, UC Davis and UC Berkeley, the school from which Blum graduated.

Each center has a slightly different focus, though all work toward the betterment of the global society. UCLA collaborates with Latin American institutions to concentrate on health challenges in Latin America; UC Davis casts a wide net with work in agriculture, the environment, natural resources, energy, public health and entrepreneurship; while the mission of UC Berkeley’s Blum Center is to improve the well-being of poor people in developing countries by designing, adapting and disseminating scalable and sustainable technologies and systems and by educating and inspiring a new generation of global citizens.

Last year, he released a call for proposals among the faculty and received seven plans from members of all three schools.

The focus on food, he said, has direct ties to UC efforts and is vastly relevant to this region.

“It’s not uncommon for people who live in agricultural areas to experience a lack of food, because the system isn’t geared toward local tables,” Traina said. “Most of our produce is shipped out of the area. And there’s a lot of poverty here, too, so even if more food was available, many people cannot afford it.”