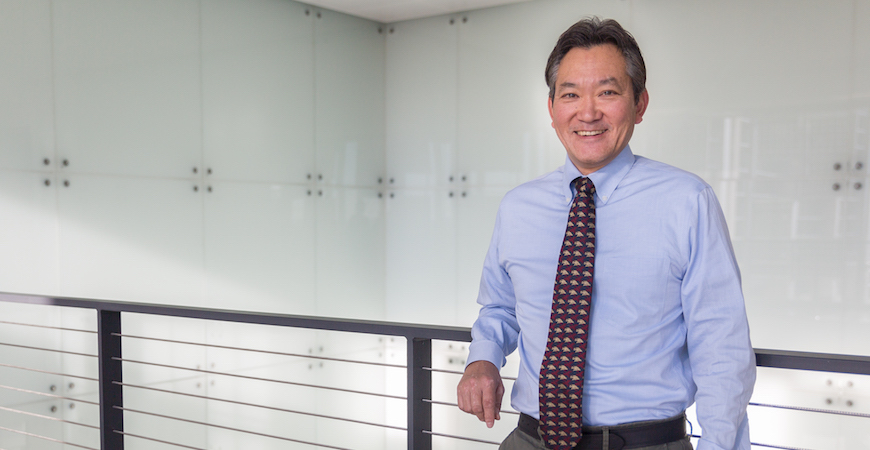 Professor Chris Amemiya is new to UC Merced, but he’s a veteran scientist with a long list of breakthroughs to his name.

Amemiya’s discoveries have changed the way scientists understand vertebrate genomes and their evolution, and he was recently elected a fellow of the American Association for the Advancement of Science (AAAS). He is UC Merced’s first biology professor, the second Health Sciences Research Institute (HSRI) affiliate, and fifth faculty member overall to receive this honor.

“Dr. Amemiya’s election as an AAAS fellow is a great honor that is bestowed on a small number of researchers who have made important and impactful contributions to their fields,” Dean of Natural Sciences Betsy Dumont said. “We join him in celebrating this success and are proud to have him among us.”

AAAS honored Amemiya for his “distinguished contributions to developmental genetics, especially for genetic and genomic studies of the coelacanth and other fish, and their implications for developmental evolution.”

Amemiya’s lifelong fascination with natural history and evolution was fostered by having grown up in Hawaii, a natural laboratory for evolution. Before coming to UC Merced, he spent 16 years on the faculty of the Benaroya Research Institute in Seattle, where he developed novel methods to study evolution and development (evo-devo).

“The work I’ve done has led to new ways of thinking about evo-devo problems,” Amemiya said. “I’m interested in studying how certain structures originated, in particular the emergence of the immune system and the innovations that enabled life on land.”

Amemiya made pioneering contributions to the development of bacterial artificial cloning (BAC) systems, which allowed scientists to study genomes long before whole-genome sequencing was a standard tool in the biologist’s arsenal. Using these methods, Amemiya helped scientists gain a better understanding of how vertebrate immune systems evolved.

I’m interested in studying how certain structures originated, in particular the emergence of the immune system and the innovations that enabled life on land.

Studying the coelacanth (a prehistoric fish thought to have gone extinct 70 million years ago, until a living specimen popped up in 1938) and cartilaginous fish (sharks, skates, rays and other species with skeletons made of cartilage rather than bone), Amemiya found that these ancient vertebrates organize their immunoglobulin genes — genes that produce a variety of pathogen-fighting proteins — differently from the way mammals organize the same genes.

Amemiya further upended the field of comparative immunology with his studies of lampreys and hagfish, jawless fishes that are among the most primitive vertebrates still in existence. His studies demonstrated that immunoglobulins, essential to virtually every vertebrate immune system, from sharks to humans, were absent from the more ancient immune systems of jawless fishes and supplanted by an analogous antibody-like toolkit. This shows that the requisite components of the immune system followed two separate paths during the evolution of vertebrates.

While studying these ancient immune systems, Amemiya discovered something else entirely unprecedented: programmed genome rearrangement. During embryonic development, lampreys systematically shuffle their DNA, discarding 20 percent of their genome in the process. The reasons for this are not fully understood, but may have implications for cancer and aging.

Though he plans to continue studying primitive vertebrates and their genomes, Amemiya is also turning his attention to chitin, the polymer that gives crustaceans and insects their hard outer shells. Long believed to be absent from vertebrates, Amemiya found that fish and amphibian genomes contain chitin-producing enzymes that synthesize bona fide chitin. Equally surprisingly, this chitin exists in forms that are much more viscous and gel-like than in an insect’s exoskeleton.

Amemiya believes that understanding the structure and function of vertebrate chitin demands more than just genetic expertise — it’s an interdisciplinary problem that requires input from biophysicists and material scientists, in addition to biologists. Having access to experts in these fields is what excites Amemiya most about coming to UC Merced.

“We never would have discovered vertebrate chitin without our genomic approach,” Amemiya said. “But we need biophysicists and material scientists to help us understand chitin’s ultrastructure and its unique material properties. From that standpoint, UC Merced is a great fit for me.”