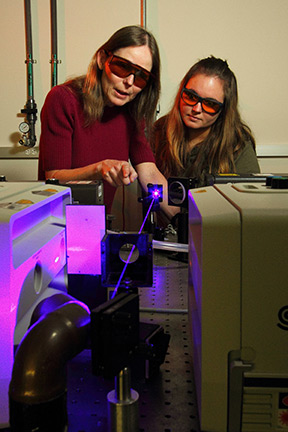 Professor Anne Myers Kelley, with the School of Natural Sciences, has been elected vice-chair of the Division of Laser Science (DLS) of the American Physical Society (APS), the world's largest organization of physicists.

Kelley, one of the first faculty members to join the campus in 2003, is with the Chemistry and Chemical Biology group in her school. She will serve as vice-chair until October, then move into the positions of chair-elect, chair and past chair, each for one year.

“It’s a very nice honor from my peers to be elected as one of the officers of this division,” said Kelley, who has been a member of the APS since the late 1980s and served the DLS as an at-large member of the executive committee for three years and as secretary-treasurer for the past six years.

The Division of Laser Science, which has about 1,300 members, is directed toward “the advancement and diffusion of knowledge in the area of science related to the use of lasers in research, the application of lasers in technology, and the development and characterization of new laser systems.”

In her position in the chair line, Kelley will help organize events and promote laser science. But there are also some new ideas being floated among leadership, including a possible name change for the DLS.

DLS membership includes physicists, biologists, chemists and engineers, and Kelley said the group wants to appeal not only to researchers who develop and study lasers but also those who take advantage of what can be done with lasers that cannot be done with other kinds of light.

She is the author of more than 145 peer-reviewed scientific publications, as well as a graduate-level textbook, “Condensed-Phase Molecular Spectroscopy and Photophysics,” published by Wiley in 2013. She is also a Fellow of the APS and of the American Association for the Advancement of Science.