So-called “helicopter parents” — those who hover over their children even into and through their college years — are often criticized for creating overly sheltered, unprepared young adults who boomerang back home.

In her new book, “Parenting to a Degree: How Family Matters for College Women’s Success” — published this week by University of Chicago Press — UC Merced Professor Laura Hamilton finds that for many moms and dads, such hands-on parenting is a way to monitor the significant investment they’re making in their children’s future by way of higher education.

“In many ways, these parents are responding to very logical economic and social pressures,” Hamilton said. “It’s very expensive to send a child to college — way more than it used to be — and there’s no guarantee that your child will be economically secure even if they graduate. Parents heavily monitor their kids because the cost of not doing so is potentially so high.”

Hamilton’s new book extends research she conducted for “Paying for the Party: How College Maintains Inequality,” which she co-authored with Elizabeth A. Armstrong. Released in 2013, “Paying for the Party” followed a group of 53 women at the same Midwest flagship state university as they went through college and out into the workforce. That book — which solidified Hamilton’s influence in the debate over higher education — showed that the college perpetuated class inequality by catering to privileged students rather than focusing on student success.

“Parenting to a Degree” shifts focus to the parents of the women in “Paying for the Party” and zeroes in on the ever-evolving relationship between universities and families. Although colleges can benefit from “outsourcing” certain services to parents, such as internship placement and counseling during stressful times, this can put parents of more modest means and their kids at a distinct disadvantage. 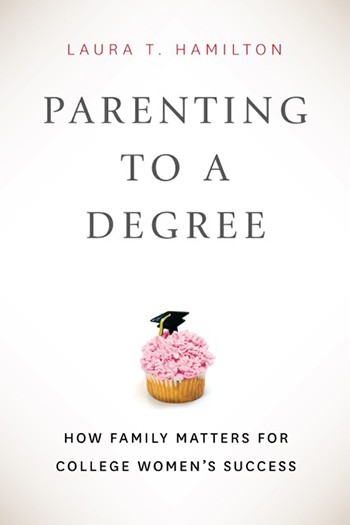 Parenting Styles Depend on Circumstances

The book examines different categories of parents. One notch below the helicopter parent is the “paramedic,” who generally affords kids their independence but doesn’t hesitate to swoop in when an emergency arises. This is a more manageable parenting style, Hamilton said, but even this level of involvement is not practical for most parents who have never been through college themselves — like at UC Merced, where many students are first-generation college-goers. In these families, parents are often “bystanders,” remaining on the sidelines of their children’s lives at college.

“Bystander parents often want to be involved, but they require some educational experience to know when and how to step in,” Hamilton said. “Their students need more help, which means the public getting on board with funding for higher education, but also the institution finding out how to help a student in ways that affluent parents do for their children. It’s not just about money — how do you advise a student the way an affluent parent would?”

The book tackles gender issues, as well — because all the students in Hamilton’s initial study are women, she discovers a broad range of expectations that parents have for their college-going daughters. More affluent parents see college as a way for their daughters to build social networks and develop social skills in order to find successful husbands; professionally-minded parents figure their daughters will become successful in their own right and find husbands of similar stature; and working-class parents operate under the assumption that their daughters will need to be able to support themselves.

For her next study, supported by a prestigious William T. Grant Scholars award, Hamilton is looking at the influence of university organizational arrangements on racial educational inequalities. To find out what colleges need to do to ensure success for disadvantaged and underserved minority students, Hamilton will look at two institutions — UC Merced and UC Riverside — where many of these students fare better than they do at other universities.

Hamilton said she hopes to find some institutional practices that have enabled students at these universities to become successful, and also ways the universities could do even better.

“Regardless of how well you’re doing, there’s always something you can improve upon,” said Hamilton, who will begin her study on campus in the fall. “Luckily for me, UC Merced has a ton of very smart, well-intentioned people who really care about these issues and who are already working on it. I’m very lucky to have that as I work on this project.”