For GradSLAM Champion, Research Is Personal 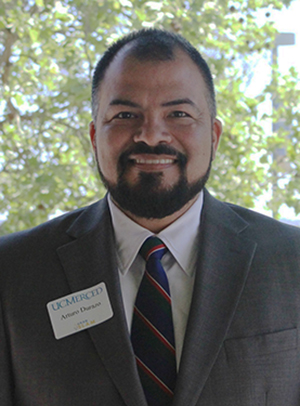 Arturo Durazo, winner of this year’s UC Merced GradSLAM! competition, has a personal connection to his research.

The fifth-year Ph.D. candidate studies the psychological effects of debilitating illnesses. Most recently, he has been researching the way thoughts and emotions guide behaviors that impede healthy lifestyles in cancer survivors — something he understands well after successfully battling cancer two years ago.

Most Americans know they should eat healthier and exercise more to stay healthy. But good choices are even more imperative for cancer survivors.

“Before I was diagnosed, I was exercising regularly and eating right,” Durazo said. “I didn’t think cancer could strike, but it did. And after a year of successful treatment, I was super-sizing my meals and couldn’t seem to make it to the gym. My outlook was that no matter what I did, cancer would return.”

Nearly 2 million people will be newly diagnosed with cancer this year, and while most will survive five years or more, about 35 percent will not.

One of the keys to longevity after cancer diagnosis and treatment is diet and exercise — doctors recommend that cancer survivors improve their diets and exercise at least 150 minutes a week. But Durazo’s research shows that on average, this population exercises for only 10 minutes per week, and only seven out of 100 meet their diet recommendations.

Having lived it firsthand, Durazo understands this paradox. A combination of overwhelming emotions and the worry of recurrence after a life-threatening illness cause many survivors to make less healthy choices.

Durazo is using his own experience to try to make a difference for those who might not otherwise survive more than five years past their diagnoses.

Durazo aims to shine a light on why this population chooses behavior that’s contrary to what they know is best.

“Understanding the psychology behind survivorship can help us to implement creative health communications that encourage healthy choices while explicitly acknowledging the challenges that survivors face,” said Durazo. “A tailored approach could really make a difference for this population.”

As winner of the UC Merced competition, Durazo will go on to represent UC Merced in the systemwide GradSLAM! event, which will be held at the LinkedIn campus in San Francisco on April 22.

This is the second year UC Merced has hosted GradSLAM!, in which graduate students have just three minutes to explain the significance of their research to a non-specialist audience.

“This fast-paced competition is a great way to encourage our students to talk clearly and straightforwardly about their research — a necessary skill that they will use interviewing for jobs, writing grant proposals and networking,” said Vice Provost and Graduate Dean Marjorie Zatz. “All of the finalists provided engaging and informative presentations about their important research. The audience was excited to learn about their projects, and judges had a difficult task choosing among them.”

The winner of the competition was originally announced to be a graduate student from the Interdisciplinary Humanities group, but a scoring error was discovered after the competition and revealed that the two runners-up, Yuriana Aguilar and Durazo, were actually tied for the top spot.

The competition judges broke the tie after reviewing videos of the students’ presentations. Aguilar remains a runner-up, and Bodo Winter of the Cognitive and Information Sciences graduate group was also declared runner-up.

Find information about how to access the live webcast of the competition or to get details about the campus viewing party on the Graduate Division website.