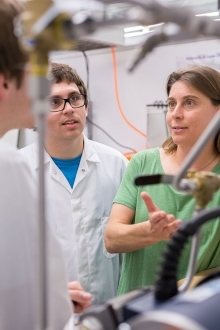 Working together to study friction on the atomic scale, researchers at UC Merced and the University of Pennsylvania have conducted the first atomic-scale experiments and simulations of friction at overlapping speeds.

In “Dynamics of Atomic Stick-Slip Friction Examined with Atomic Force Microscopy and Atomistic Simulations at Overlapping Speeds,” a paper published in Physical Review Letters, UC Merced engineering Professor Ashlie Martini, graduate student Zhijiang Ye and their partners at Penn reveal how they overcame the technological limitations of studying friction at such a small scale. They hope their work will eventually lead to greater insights into how to control friction and wear on machinery.

The team sped up a real atomic force microscope and slowed down a simulation of one, adding to a body of knowledge about a phenomenon called “stick-slip friction,” which often affects sliding at both the macro and atomic scales.

Martini and Ye worked with Penn mechanical engineering and applied mechanics Professor Robert Carpick and several other graduate students. It’s a collaboration cultivated over many years.

“We’re on our third National Science Foundation (NSF) grant together,” Martini said. “Our models explain the experiments, and the experiments help verify the models.”

Stick-slip friction — the resistance associated with sliding — is the product of atomic points of contact between two objects being temporarily stuck together. They remain that way until applied force provides enough elastic energy for them to break apart. The points then slip and slide until they get stuck again.

But studying the atomic interactions underlying stick-slip friction is inherently difficult, as the points of contact are obscured by being flush against one another.

To get around this problem, friction researchers often use the tip of an atomic force microscope (AFM), an ultra-sensitive instrument capable of measuring nanonewton forces, as one point of contact. Because an AFM tip works much like a record needle, researchers can measure the friction the tip experiences while it is dragged over a surface. Martini and Ye’s models predict the dynamics of all of the individual atoms in that tip.

The quality of measurements in an AFM experiment depends on preventing stray vibrations in the tip. Usually, researchers drag the tip about 1 micrometer per second — at the fastest. To match this experiment in a simulation, individual atoms of the tip and the surface are modeled on a computer.

But doing the measurements this way has its problems: Each frame in a simulation has to be calculated in such small steps that a computer would need about 30 years to simulate the real AFM experiment’s micrometer-per-second speed.

To overcome this limitation, typically, the simulated tips slide a million times faster than in experiments, so the researchers needed to meet in the middle. Martini and Ye found a way to slow down their model tips, while the Penn researchers sped up their real ones.

“This study now opens up many possibilities for using the full atomic insights available in atomistic simulations to reliably interpret the results of experimental studies,” Carpick said. “We’re optimistic this will eventually lead to general and practical insights to understand, control and reduce friction and wear.”

In addition to the results of the research itself, Martini said the collaboration benefits the UC Merced graduate students. They go to Penn for a few weeks each year and work directly with their partner researchers, which helps them prepare for life after grad school.

“Grad school can be pretty insular,” Martini said. “This helps prepare students for the real world, where teamwork is commonplace.”