This week marked the end of the first-ever UC Merced GradSLAM! competition, in which graduate students were given just three minutes to present their research to a panel of non-specialist judges with the goal of increasing the students’ communication skills and ability to effectively present their work with poise and confidence. 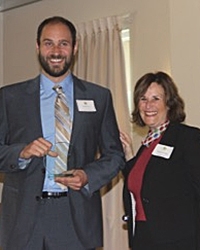 Environmental systems student Nathaniel Bogie emerged victorious from among 10 finalists in the April 7 competition. Bogie will receive a $2,000 prize and the chance to represent UC Merced in the systemwide Grad Slam competition in Oakland on May 4.

Runners-up Joannee Zumkehr, a quantitative and systems biology student, and Holly Rus, from psychological sciences, will each receive $1,000. Each of the remaining finalists — who were chosen to advance from among 32 competitors in the March 3 qualifying rounds — will be awarded $250 in recognition of their performances.

“I am so pleased with the caliber of presentations that we have seen during the course of this competition,” Vice Provost and Dean of Graduate Education Marjorie Zatz said. “Communicating complex research to a group of laypeople in a polished, professional and engaging manner can be quite difficult, but our finalists have risen admirably to the challenge.”

The 10 students selected as finalists represented the Applied Math, Cognitive and Information Sciences, Environmental Systems, Psychological Sciences, and Quantitative and Systems Biology graduate groups. The finalists were able to take advantage of individualized coaching sessions with representatives from Playhouse Merced, who helped them further develop their public speaking skills.

The systemwide Grad Slam competition, hosted by President Janet Napolitano, will be streamed live on campus at the Grad Pad (SSB 350) from 11 a.m. to 1:30 p.m.