The ribbon-cutting ceremony begins at 1 p.m.

Thirty months in the making, the building is designed to foster interdisciplinary work for researchers across UC Merced. 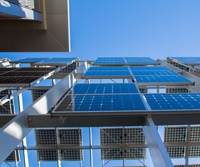 “We’re continuing a concept that has been important since the campus itself was being planned – collaboration between the schools,” Academic Facilities Planning Director Steve Rabedeaux said.

Some labs are designed for different disciplines to use simultaneously, and the building includes a complement of public spaces to enrich the campus environment and offer opportunities for group work, as well as educational and social gatherings.

For example, the space between the two science and engineering buildings has been transformed from a fire lane to an area with shade, seating and tables to facilitate student collaboration right outside the instructional labs in both buildings that flank the new plaza.

There is also a deeply shaded back porch on the south side of the building overlooking the South Bowl that will allow labs and shops to open their folding glass walls and use this space to conduct or build experiments.

With more than 100,000 square feet inside, the building provides room for the campus to grow, Campus Architect Tom Lollini said.

The $88 million building incorporates the campus philosophy of recycling-reusing-reclaiming, with construction crews diverting 1,500 tons of material from area landfills. Additionally, 40 percent of the materials used in the building’s construction are recycled or reclaimed.

It’s also highly energy efficient, with a photovoltaic structure that shades the building’s promontory and glassed “activity bar,” which house most of the building’s conference rooms and collaborative spaces.

The structure doesn’t just shade the building, though. It also generates 52 kilowatts of solar energy to help power the building.

S&E2 also features a solar water-heating system on its roof to cover all of the building’s hot-water needs.

And an outdoor area south of the building’s west wing, between the arcade and natural landscaping, incorporates a natural paving called NaturePave that creates a park-like setting, is sun-reflective so it doesn’t store residual heat and eventually blends back into the earth around it.

Lollini said the building is expected to achieve platinum Leadership in Energy and Environmental Design (LEED) status from the U.S. Green Building Council, which will make it the seventh of eight expected platinum awards for the campus so far.

The building includes room for robotics, thermodynamics, electron microscopy, Engineering Service Learning and organic chemistry labs, among others; an energy-efficient computer-server room with water-cooled racks for the equipment; a high-resolution imaging suite; and to allow the environmental science faculty members now housed at the Castle Research Facility to move to campus.

“I think they are all excited about having new facilities, because they’ll be able to take their research to the next levels,” Lollini said.

School of Engineering Interim Dean Erik Rolland has already moved in to his new office, as have many faculty members and lab managers who are stocking their labs with equipment and supplies.

“S&E2 provides enhanced capabilities for UC Merced through state-of-the-art educational and research facilities, including labs, meeting spaces and student work spaces,” Rolland said. “We’re in a growth phase, and we have a need to continually expand our physical facilities.  S&E2 is an important step for us.”