Jose Garcia, a fourth-year student, will spend next summer as the only intern in Chevron Oronite’s Tribology division, with a small group of researchers who delve into lubricants, additives and the relationship between machines and fluids for the multinational corporation.

The past two years, the division has chosen an MIT student for the summer position.

“It’s going to be a great experience,” said Garcia, who hails from Santa Paula and is majoring in mechanical engineering. 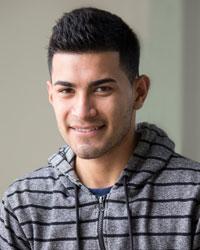 The internship opportunity came through Professor Ashlie Martini’s connections with Chevron. The worldwide company has headquarters in Richmond, and she has been working with some of its scientists, sharing knowledge and her expertise in tribology, the study of friction.

“Chevron is one of the biggest players in my field,” she said, “so I really wanted to set up this connection.”

Tribology isn’t a big field in California – most of the work is done in the Midwest and on the East Coast, where there’s more manufacturing. UC Merced doesn’t have a tribology emphasis yet, but Martini’s lab in the School of Engineering centers on the topic and she hopes to develop a program here to add to the growing list of ways UC Merced graduates can contribute to the economy.

She said she worked with the Career Services office to put the word out to students who wanted to apply for the position, and they got back about 40 applications. Chevron selected five students to interview, and Garcia was their top choice for the paid position.

Garcia's selection is an example of how UC Merced and its exceptional leadership opportunities are preparing students for futures in cutting-edge industries.

Like the others interviewed, Garcia has little experience with tribology, but his leadership experience as president of the Society of Hispanic Professional Engineers is what set him apart, he believes.

“They asked a lot of behavioral questions, about things like dealing with conflict with people who don’t agree with you, problem solving and teamwork,” Garcia said.  “A lot of the company’s vision ties in with how I try to do things – to work well with people.”

Garcia will live in Richmond for the summer before returning to campus next fall. Martini said she will help Garcia learn as much as he can about tribology because he wants to be well prepared for the internship.

“I don’t want to let anyone down – the school, Professor Martini or the students in the Society of Hispanic Professional Engineers,” Garcia said.

He hasn’t made a decision about graduate school yet, and said that some of his decisions are likely to be greatly influenced by the coming year.

Martini said Chevron was more than willing to look at freshmen and sophomores for the position, too, as it sought someone who could take the position for more than one summer.

But not many younger students applied – a situation Martini said is unfortunate.

“They don’t think they are prepared or qualified, but students shouldn’t let that stop them from pursuing what they are interested in,” she said. “Students could have three summers of great experience before they graduate.”