The tougher a problem, the more creative a solution it needs, from the increasing power in orbiting satellites and saving tigers to saving state parks and catching thieves.

And when a problem seems absolutely impossible?

“That’s when you call me,” said Professor Erik Rolland. “I love modeling problems people haven’t been able to model or solve before.” 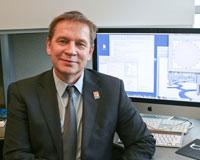 Rolland, with his varied interests and research, is another example of UC Merced’s wide reach and of all the ways in which the campus and its accomplished faculty members are changing the world.

His background is in theoretical computer science, applied mathematics and management, but what he’s really all about is solving problems.

If it’s a problem of crime – like fraud – criminals had better look out.

Rolland, who works with both the School of Engineering and the Ernest & Julio Gallo Management Program, spends a lot of his time working on issues of risk and technology management, disaster response and social networking.

He and colleagues from the universities of Connecticut and Alberta, Canada, recently published an article in the journal Computer Fraud and Security, connecting an algorithm called the Steiner Tree – designed by Swiss mathematician Jakob Steiner – and fraud cases.

That doesn’t always mean the criminal is someone known to the connecting parties, but often it is, even if it’s in an offhand way, such as through a chance meeting.

Rolland and his colleagues hope law enforcement agencies will put their solution to use.

“Incorporating the algorithm into fraud-investigation software could save billions of dollars and a lot of manpower in investigations,” he said.

Rolland’s interests and activities are quite broad, from working with entities like the World Bank of its Save the Tiger program to figuring out information-capacity and battery-life issues for geostationary satellites that orbit the Earth.

He is working with California’s State Parks, trying to design better business models that can help them operate more efficiently and remain open and accessible to the public.

There has been a culture shift in the way people think about and use public parks, and Rolland said there has to be a change in thinking on the part of parks leaders, too.

“While it is a mission to protect the parks, we also need to keep in mind the visitors, using the parks and keeping them viable,” he said. “I’m all about rules, but not rules that are counterproductive and limit your ability to work.”

The work with the World Bank isn’t just about saving a species; it’s about solving border conflicts and eradicating poaching.

“A lot of times it’s about behavioral changes,” Rolland said. “How do you motivate people to do the right thing?”

He also uses his research to look into corporate issues, such as how to design the best work teams so companies can increase productivity, and how to improve customer satisfaction.

Rolland, who started here in January, said he is also considering ways to further incorporate the concept of entrepreneurialism into people’s thinking and focus on what will set UC Merced’s students apart from other college students.

“We need to anchor or opportunities to what is around us – wine, agriculture, parks and nature preserves, energy,” he said. He’s working with UC Solar on integrating entrepreneurship and innovation into its graduate programs, looking at other ways to increase interdisciplinary work on campus, too.

“Anything can be solved,” Rolland said, “with enough creativity. At UC Merced, we have a lot of creative people, and we lower the walls between our academic specialties, positioning UC Merced for interdisciplinary success. “