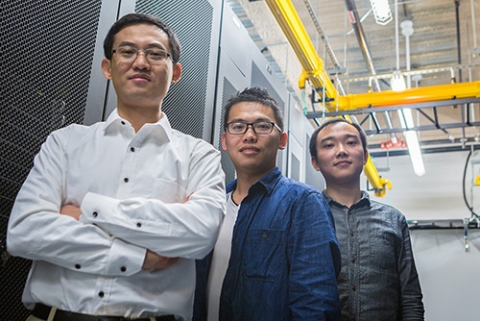 In his first faculty position, in his first year at UC Merced, Professor Dong Li has won his first grant from the National Science Foundation (NSF), and it’s a prestigious Faculty Early Career Development (CAREER) award.

The CAREER awards are given to junior faculty members who exemplify the role of teacher-scholars through outstanding research, excellent education and the integration of education and research within the context of the mission of their organizations, the NSF said.

Li joins the 12 other UC Merced professors who have won CAREER awards from the NSF since the campus opened.

Li was a research scientist at the Oak Ridge National Laboratory in Tennessee before joining the School of Engineering. He’ll use his $500,000 grant over five years to further his hardware-software co-design work to model, characterize and correct errors in extremely large-scale supercomputers.

Many researchers use numerical modeling and simulation in their work, and need large-scale parallel computers to address complex physical and computational problems. Errors in hardware and software can not only slow the execution of applications, they can corrupt correct execution and data integrity.

Protecting work from those errors can impact performance, causing between a 20 percent and 50 percent loss of efficiency when detecting and correcting errors. The more specific an application has to be, the more sensitive it is to errors, Li said.

“Some applications are resilient to errors, and some are not, mostly because of the algorithms and program construct,” he said. “For example, climate modeling is less sensitive to errors because it is already using approximations.”

Li said the work could help other researchers, but could also lead to more everyday applications, such as improved handheld devices.

He and a team of two Ph.D. students, two master’s students and two undergraduates will work toward a special software solution that could either change the way applications are designed or selectively enforce protection, turning off the protection when it’s not needed.

The team is working with the Lawrence Livermore National Laboratory, which provides opportunities for testing Li’s work.

“At the lab, some scientific simulation codes have to be 100 percent accurate,” he said. “Working with Lawrence Livermore lab gives us the chance to see what’s working in a practical environment.”

Some of the NSF money will support the student researchers, but some will be used to purchase more nodes for Li’s large-scale, high-performance computing needs. He’s connected to the campus’ supercomputer network, but needs more than the eight computing nodes he has now.

He anticipates not only publishing an annual report so the NSF can see his lab’s progress, but contributing papers for publication at prestigious scientific conferences. Last year, a paper from his lab was nominated as the best student paper at the Supercomputing conference, one of the flagship conferences in his field.

For Li, it doesn’t matter what models researchers are creating — he has worked on everything from climate change to the fluid dynamics of jet engines. It’s the errors contained within the problems that concern him.

“We’re covering a lot of very complex problems, so this will be really good experience for the students,” Li said.