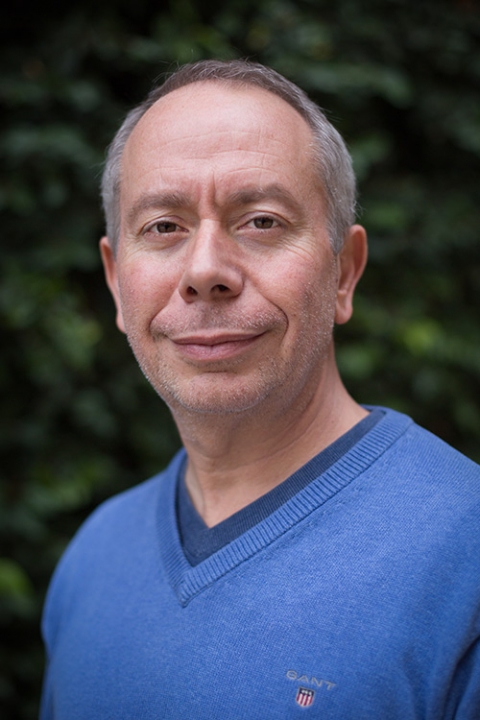 Professor Victor Muñoz’s novel approach to advancing biomedical research has earned him the campus’s first prestigious Keck Award, including $1 million over the next five years.

The University of California, Merced, professor was chosen by the W.M. Keck Foundation, which focuses primarily on pioneering efforts in the areas of medical, science and engineering research.

“This is a fantastic first for UC Merced, and it points to the growing recognition of the important research being conducted on the campus,” School of Engineering Dean Mark Matsumoto said. “Professor Muñoz exemplifies the outstanding quality of our faculty.”

Muñoz plans to design and engineer a new kind of protein he previously discovered to create miniscule biosensors that can measure even slight changes inside cells and provide high-resolution, highly specific information in real time.

A bioengineer who joined UC Merced’s School of Engineering in 2014, Muñoz said he has been looking at these special kinds of proteins for more than a dozen years, but it’s only now that he has found practical ways to turn them into super-performing biosensors.

“They are, simply, devices that can selectively detect the levels of biologically relevant compounds, such as hormones or drugs, or even key biological processes such as aging and the onset of disease,” Muñoz said.

But current biosensors only answer simple questions: Is someone pregnant? What is the current percentage of sugar in a diabetic’s bloodstream? And often, it takes time — including sending results to labs for analysis — to get answers.

Until now, creating these nano-sized sensors — thousands of times smaller than the width of a human hair — hasn’t been possible because of the limitations on the proteins researchers typically use to bind to the molecules they are searching for.

But while studying how proteins fold themselves into their functional 3-D shapes, Muñoz and coworkers at his previous labs, first at the University of Maryland and then at the Spanish National Research Council, discovered a new set of proteins that behave differently because they fold gradually rather than in a single stroke.

“They were theoretically predicted, but we found them and have been working for a long time to understand what makes them so special,” Muñoz said. “My goal now is to use them to build better sensors that can detect a broader range of changes with very high resolution inside living cells that could be used in ways that have never been possible before.”

If successful, the new sensors will help researchers understand not just that something inside a cell has changed, but when, by exactly how much and over what period of time. That could lead to being able to answer the “why” of various biomedical questions, too.

“Professor Muñoz’s research represents a fundamental paradigm shift in the technology of biosensors,” Vice Chancellor for Research Sam Traina said. “While the initial proposed applications would be in the areas of medicine and human health, if successful, this approach could readily be applied to other topics such as discrete corrosion science, environmental sensing and materials research. We are extremely excited about the new opportunities that might result from the work of Professor Muñoz and his colleagues.”

The W.M. Keck Foundation gives only a handful of research grants each year through a highly competitive process. There are two categories for research awards: medical, and science and engineering, and each campus is allowed only one entry in each category. Muñoz’s award falls under the medical research category.

“What’s unusual about these awards is that the Keck Foundation supports new, high-risk, high-reward research projects that might not be as far along in development,” Muñoz said.

The foundation focuses on important and emerging areas of research that have the potential to develop breakthrough technologies, instrumentation or methodologies; are innovative, distinctive and interdisciplinary; use unconventional approaches or can challenge prevailing paradigms; and have the potential to be transformative — such as founding a new field of research, enabling observations not previously possible or altering perceptions of a previously intractable problem.

Muñoz plans to collaborate with others on campus. The bulk of the work in the next few years will be in developing a set of principles for creating the sensors. Muñoz and his lab will use them to measure pH, salinity and calcium ion levels in cells, but he said that once the basic principles are formulated, sensors could be created to detect any molecules researchers want.